Jake Pavelka and Vienna Girardi still have one of the most talked-about romances in the "Bachelor" universe. Vienna flew her way straight into Jake’s heart, and this week marks the 10-year (!!) anniversary of the Season 14 “Bachelor” finale where they got engaged.

Despite their extremely tense televised breakup three months later, Jake and Vienna appeared destined for happiness after he proposed to her over Tenley Molzahn.

Saint Lucia acted as the perfect backdrop for the culmination of Jake’s love story. He and his two remaining women went on their final dates in the turquoise water and shared kisses at sunset. Before the proposal, Jake admitted, "This is the hardest decision I'll ever have to make."

He spoke about his connection with the two women, saying that his time with Vienna "feels so natural." Tenley, on the other hand, "captivated" Jake the first night at Bachelor Mansion.

However, he expressed concerns about his physical relationship with Tenley. He told her on their last date on a yacht, "Have you ever been concerned how the emotional chemistry between us is so alarmingly hot, and sometimes it feels like the physical chemistry is not as hot as the emotional? I’m not talking about the sexual chemistry."

Tenley disagreed, saying, "I feel like we have heat."

When it came time to propose, Jake tearfully told Tenley he would not get down on one knee for her. “We have had such an amazing time getting to know each other. There are so many things that I love about you — your smile and your positivity,” he said. "I do love you. You’re just perfect. I don’t know what it is. Something just doesn’t feel right. I don’t know why."

He ended his speech, "Where did we miss each other?" 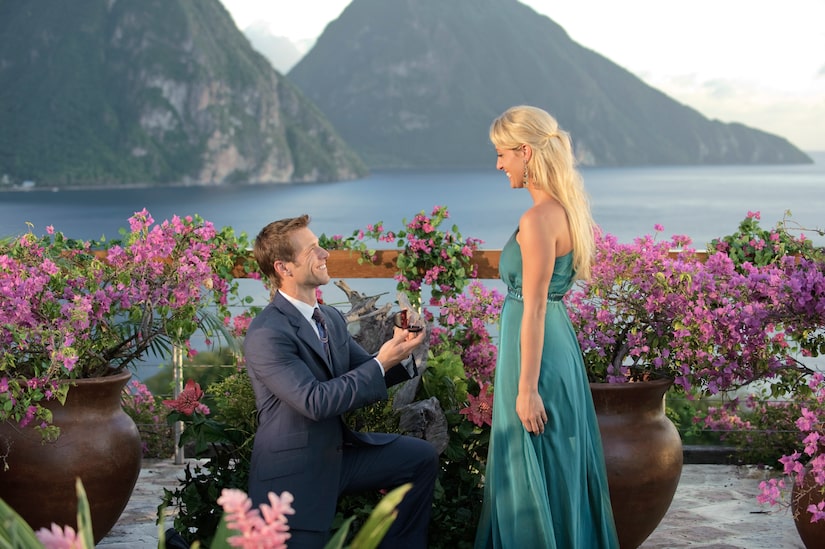 After a tearful parting, Jake prepared to propose to Vienna.

In a voice-over, Vienna called the Bachelor her "Prince Charming" and "soulmate." She said, "I can't fathom the idea of not having Jake in my life... I've fallen in love with this guy and I've given him my heart, but I'm scared. I've found my place in life, and that place is with Jake."

The pilot professed his love to Vienna, lauding her as "an amazing woman." She immediately accepted his proposal, and they kissed under the Caribbean sunset sky.

Appropriately, 10 years after Jake's season, Pilot Peter Weber prepares to make his final decision on Season 24 of "The Bachelor." Be sure to tune in to the season finale on Monday, March 9, at 8 p.m. on ABC.