“Bachelor in Paradise” success story Jade Roper and Tanner Tolbert are about to turn their family of three into a family of four. But what will his name be? That’s why they’re taking to Instagram.

A few months after everyone’s March Madness basketball brackets went away, Jade started a new one of her own. This time around, the bracket involved baby names. On July 25, the Bachelor Nation alum shared on Instagram the final four names that fans prefer for Baby Tolbert: Reed, Beckett, Brooks and Easton. Jade posted on social media and told her followers to once again pick their favorites for her “Snack Tray (aka Baby Tolbert).”

It turns out that Jade and Tanner fans have good taste because Tanner’s “top 2 name choices made the final 4.” No word yet on which two names they are. Only a few more weeks until we find out who won the baby name championship!

Another option that Tanner suggested but sadly didn’t make the cut: Chris Harrison Tolbert. It has a certain ring to it.

The Bachelor Nation alums announced on January 28 that they were expecting their second child together. Jade uploaded a family photo on Instagram that showed Tanner carrying their daughter Emerson while Jade holds a series of ultrasound photos. 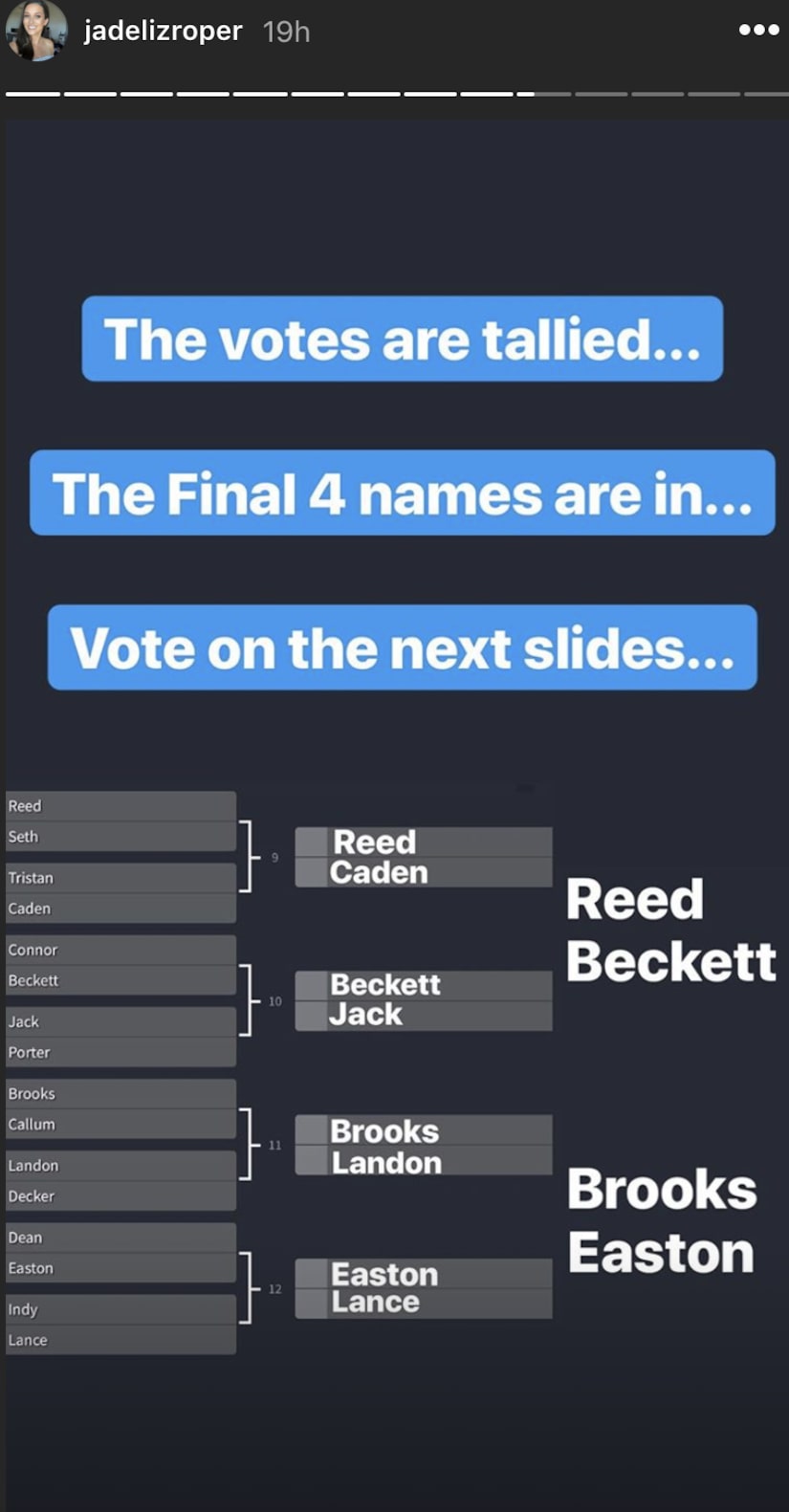 “Baby #2 is adding to our crew!! We are overjoyed our bundle of love will be joining us in August!” she captioned it. “We’ve been dreaming of you for a while now, and you are already loved beyond imaginable, sweet baby.”

About a month after sharing the happy news about their family, Jade and Tanner opened up about a harder time in their past when it came to conceiving. On February 26, they posted a video on YouTube titled “Pregnant in Paradise... Our Miscarriage Story” where they tearfully talked about what happened.

The next day, Jade wrote on Instagram, “I had a miscarriage. These words have burned inside me for over three years. I was honestly so scared to share our story, because I have always had this inner voice that’s said I don’t matter as much, especially when it comes to my struggles or my pain.”

Jade revealed that she got pregnant during “Paradise” when they had sex in the Fantasy Suite. She continued in her Instagram caption, “I’ve been keeping this weight for a long time, but being pregnant now again, all these emotions have been on the surface for me. I just felt it was time to get it out of me and share our story and honor our baby.”

On March 11, they found out at their gender reveal party that they were having a baby boy. Jade told Us Weekly that when she informed Tanner she was pregnant, “He grabbed me, hugged me and was crying while laughing, and I was crying.”

We can’t wait to meet you, Baby Tolbert!