There was a new Kristina Schulman in town this time around for “Bachelor in Paradise.”

Kristina arrived on the second day of “Paradise” Season 6 in her second stint on the beach looking for love. It started off rocky for her and didn’t get much smoother throughout her time on the show. She fought an uphill battle most of the way, but her new mentality going into the show helped her persevere through the harder days.

Kristina found herself in the center of a number of storylines, with the main one involving Blake Horstmann, Caelynn Miller-Keyes, and Stagecoach. She had no idea her personal life and intimate relationships were going to be revealed before she even arrived, which she definitely did not appreciate. However, Kristina did her best to handle it all calmly.

The 26-year-old spoke with Rachel Lindsay and guest co-host Demi Burnett on an episode of “Bachelor Happy Hour” about how she flew down to “Paradise” with a mindset focused on being “strong.” It represents a shift in focus compared to her last time on “Paradise” and the messy love triangle involving Dean Unglert and Danielle Lombard.

Kristina said she “had so much growing to do” after “Paradise” Season 4, and she feels like she’s accomplished that. She told Rachel and Demi, “I definitely feel like I’m much stronger now and not going to put up with bulls—t. I’m a very sensitive person, so my sensitivity was perceived as weakness, and I heard all about it.” 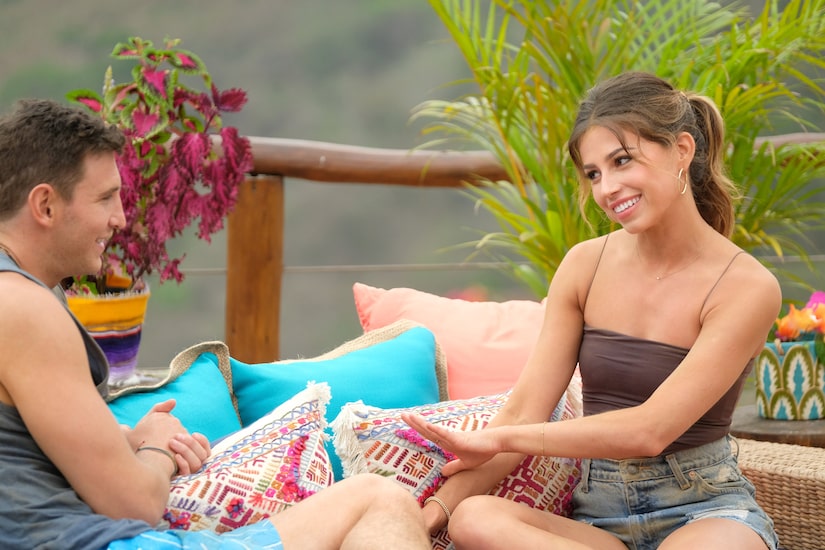 She then discussed how she tried to transform this perception of “weakness” into strength. Kristina said, “This time going into ‘Paradise,’ I wanted to come off stronger. You can still be sensitive, and you don’t have to put up with BS.”

She admits she struggled a bit with it and didn’t know the fine line to walk because “I went from one extreme to the other.”

Ultimately, Kristina stayed true to herself and her goal of taking things less seriously. She shared, “On that beach, I thought if nothing else comes out of it, I was happy, I was myself, I was strong. I’m not sure where it went wrong, where so many people had negative opinions about me being strong versus me being sensitive.”

Kristina also said that her main intention heading into “Paradise” this year was “to have fun.” Upon receiving her date card, Kristina invited Blake out, which rubbed some people the wrong way. She took Blake on “a friendship date” and wanted to use that time to clear the air about what happened at Stagecoach. He apparently told her about his night with Caelynn just three days before they headed down to Mexico.

It turns out that Kristina had her eye on someone else on her way down to the beach, but she was disappointed when he wasn’t there that first week. She revealed, “I came down to ‘Paradise’ the second day and I really wanted to meet Connor [Saeli].” She said she invited Blake on the ATV date because, “I wasn’t feeling anyone and I wanted to have fun, and I knew I could have fun with Blake.”

Listen to the rest of Kristina’s interview with Rachel and Demi now, and be sure to subscribe today on Apple Podcasts, Spotify, or wherever you listen to podcasts.