One “Bachelor in Paradise” friendship just went even more international.

Joe Amabile and Kendall Long reunited with Season 5 “Paradise” bartender Yuki Kimura for a night out in Tokyo, Japan. All three shared the same video of them clinking glasses at dinner. Chicago native Joe posted two additional videos from the evening, explaining that Yuki took them to a restaurant on the 50th floor with sweeping city views where he was about to try monkfish liver. He said in another Instagram Story video, “The party’s just beginning.”

Yuki made her mark on “The Bachelor Japan” on the show’s first night, looking like she fell straight out of “Cinderella” as she exited the limo. Bachelor Hirotake Kubo’s jaw dropped when she took her first steps toward him in a short white dress and heels that resembled glass slippers. 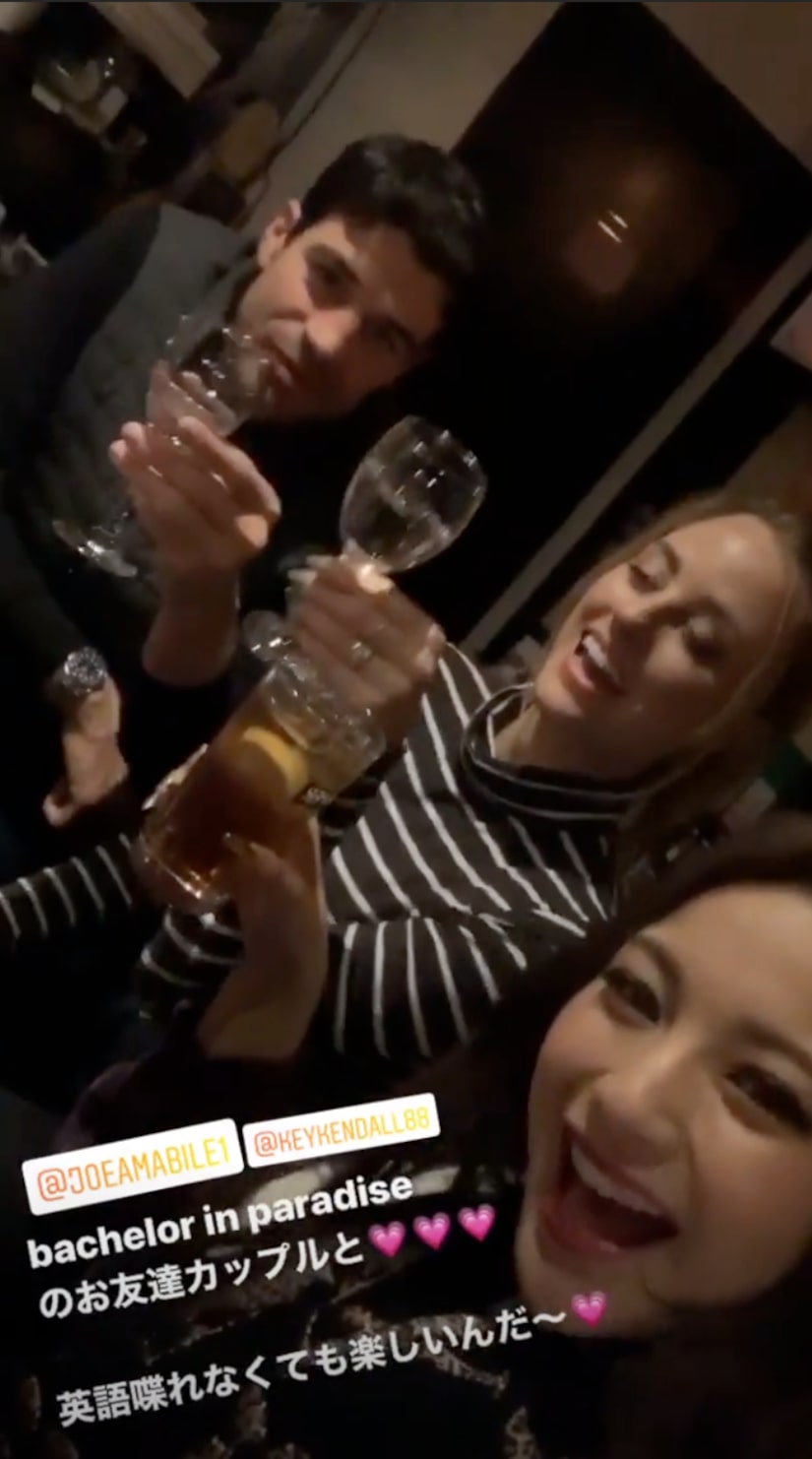 Yuki made it to the top five before she was left on the tarmac as the Bachelor jetted off with the other four women. However, her time on “Bachelor”-related shows didn’t end there. She was an instant sensation and became a beloved member of the house on “The Bachelor Winter Games,” even though she knew just a handful of words in English.

In her “Winter Games” intro video, Yuki explained that she watched “Bachelor America on YouTube” and could recite six English phrases she learned: “thank you,” “okay,” “hello,” “goodbye,” “I love you,” and “will you marry me?”

Chris Harrison raved about Yuki in interviews before the show. He told People that Yuki is “one star that will take over America and become maybe the biggest star in the world.” He said she would “absolutely captivate everybody” thanks to her magnetic personality. He called her “so compelling and so sweet.”

According to Chris, they brought a translator to the show to help Yuki, and she “embraced it.” Sadly, she didn’t end up in a relationship on the show, so she had to leave early. Chris sat her down and tried explaining in a mix of Japanese and English that she had to depart because she had “no boy.” Yuki sobbed while saying goodbye to all of her “Winter Games” friends, but remained optimistic that she would find a boyfriend in Japan.

Yuki told “Japan Times” that her experience on “Winter Games” was “a dream come true.” Once again, her time in Bachelor Nation did not fully come to a close. She got to see some of her Bachelor Nation friends later that year on Season 5 of “Bachelor in Paradise.” She joined Wells Adams behind the bar and served drinks while other cast members served up drama. Joe and Kendall started their relationship on Season 5 of “Paradise,” so it all comes full circle.

Joe and Kendall arrived in Tokyo just a few days ago, and from the looks of it, their trip is already a culinary excursion — monkfish liver included. Grocery Store Joe and Kendall often share photos and videos of their meals, whether they cooked them or dined out at a local restaurant.

This vacation in Tokyo is no different. According to their Instagram posts, they ate “sushi for breakfast” and Joe also tried “octopus on a stick.” While he appeared a tad apprehensive to take a bite, he commented on Instagram that it was an “interesting texture but not bad lol.”

Kendall and Joe’s get-together with Yuki was surely one of the first of many adventures in Tokyo, and we can’t wait to see what else they do!