On Wednesday, Ashley Iaconetti posted a photo of Ben Higgins and his girlfriend Jessica Clarke alongside a photo of Peter Weber and Madison Prewett, who joined Peter on this season’s first one-on-one date of “The Bachelor.”

Both pictures bear another similarity: They were both taken at weddings (of sorts). Ben posted his on September 8 at a friend’s nuptials. Jessica wore a gold wrap dress, while Ben donned a white shirt, gray suit pants, and a mint-green tie. He captioned it, “This wedding season which is quickly coming to an end: We witnessed 15 couples get married. Increased my tie collection by 4 ties. Had 4 bachelor parties. Cried 12 times. And I personally had very lovely date to it all.”

Peter took Madison to a very special family event for their one-on-one: his parents’ vow renewal. In their picture, Peter also wears a gray suit and Madison looks stunning in a one-shoulder coral dress. 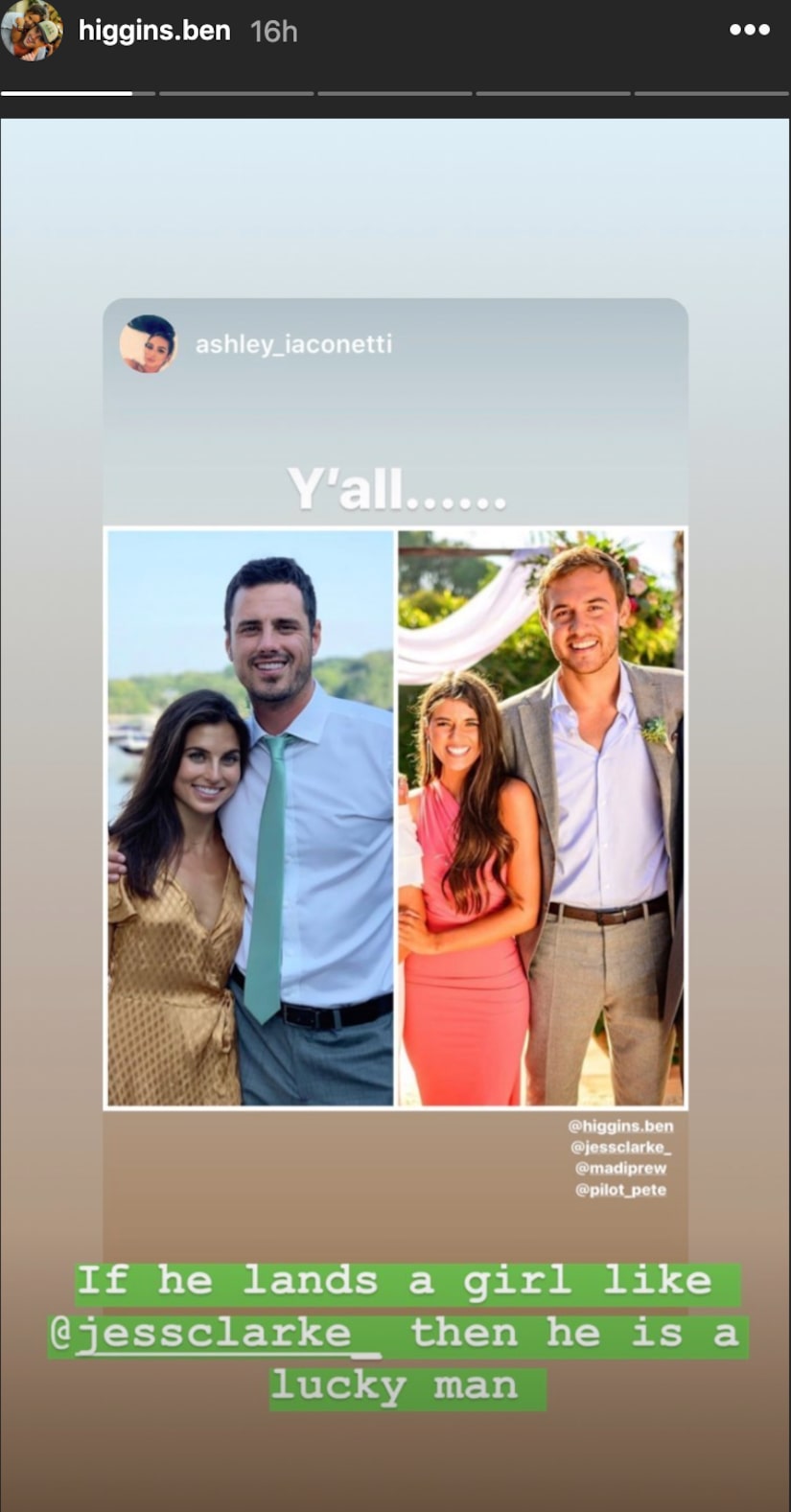 Ashley shared the photo to her Instagram Story with the caption “Y’all…” and tagged the four of them.

Ben reposted it and wrote, “If he lands a girl like [Jess] then he is a lucky man.”

Since Peter’s season just started, viewers still have a long way to go to see whether Peter actually “lands a girl” like Ben’s current girlfriend. Peter and Chris Harrison, however, have both shared a few coy details about his season and how it ends.

In an interview with The Hollywood Reporter, the show’s host explained this would be “a nontraditional season.” He said, “It is a turbulent, wild, emotional, gut-wrenching ride right up until the very end. You won’t predict how this comes to a conclusion.”

At the beginning of the trailer for the rest of the season, Chris tells Peter at the final rose ceremony, “Before you do what you’re about to do, there is something you should know. There’s something I just found out — all of us just found out. I’m not sure how this all ends, so I just wanted to give you a heads-up.”

While this remains a mystery, Peter said in an interview with Glamour, “That last week was the hardest week of my life, and it didn’t stop until the very end.”

He added, “It’s not overproduced at all. I promise you.”