Some members of Bachelor Nation are quite literally tired of the drama going down on Peter Weber’s season of “The Bachelor” — just ask Rachel Lindsay and Becca Kufrin.

The “Bachelor Happy Hour” hosts discussed Monday’s episode of “The Bachelor,” which picks up from a cliffhanger at the cocktail party in Cleveland. Alayah returned and received a rose, which infuriated most of the women — not just because of her reappearance but also because of Peter’s “wishy-washy” decisions.

Peter ultimately sent Alayah home before the rose ceremony, telling her, “I think that with everything that’s happened, this is a little too much. I don’t want to have to put you through any more of this, but I think that it’s probably time to say goodbye.”

Rachel and Becca spoke with Deandra on a new episode of “Bachelor Happy Hour” and got her take on the situation and how it felt to be eliminated after speaking her mind. Rachel asked Deandra, “From the outside, it’s a s—t show. Becca and I were saying we have to detox. Becca has to take steps away. Is this real? Was this your reality when you were on it?”

According to Deandra, if Bachelor Nation feels fatigued watching it, imagine living it. “If you guys are tired, I think I aged six years from this drama,” she quipped. “I think I have gray hair now. I don’t understand why Peter spent so much time trying to figure out what was going on here. At the end of the day, you decide whether or not you believe who is speaking, and take action based on that.“

She continued, “I don’t think we need to ask everyone in the house their opinion. Peter, this is about you and Alayah. If you feel like she’s fake or what she’s saying is not true, you decide how you want to take care of this.”

Peter sent Deandra home that night, not long after she called him out in front of the entire group of women. She asserted at the party, “Sorry, Peter, but I’ve never felt so under-recognized by somebody. For us who went on the group date and busted our asses on the field and literally have the physical bruises to show, and then to show up to the cocktail party and ignore half of us who didn’t get time with you and see you walk hand-in-hand with Alayah, it was the biggest slap in the face. I couldn’t even look at you.” 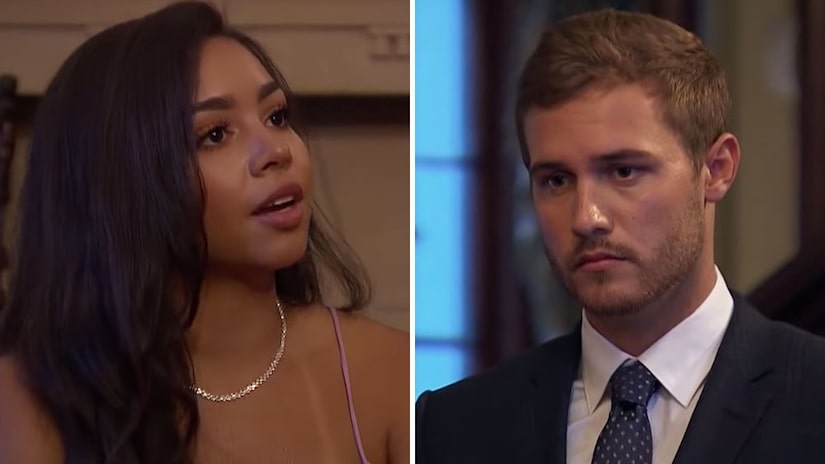 Deandra explained she felt “furious” after not receiving a rose. “You are on this journey to find the woman who is for you, so why are we spending so much of this time on the same six girls trying to figure out about one girl’s drama?” she said on the podcast. “You have so many smart, beautiful, ambitious women here.”

The Plano, Texas, native added, “It’s almost as if he was rewarding the drama. I should’ve jumped in there and made something up so he would’ve paid attention to me.”

Ultimately, Deandra understands why she got sent home and can see Peter’s strong connections with other women. She shared, “I was a little frustrated looking back on it, and I feel like he never really saw me. I’m happy that Natasha and I said our piece, but he obviously wasn’t impressed because he sent me home right after that.”

To hear the rest of Deandra’s interview and her reactions to all the drama, listen to the new episode of “Bachelor Happy Hour” now. Don’t forget to subscribe on Apple Podcasts, Spotify, or wherever you listen to podcasts.