Rachel Lindsay is shedding some light on the early days of her relationship with Bryan Abasolo.

Rachel spoke with Becca Kufrin, Garrett Yrigoyen and Bryan on a new episode of "Bachelor Happy Hour" about life post-"Bachelorette" and how everything changes once the season ends. She began, "What you underestimate — this is advice to any future person coming on 'The Bachelor' franchise if you make it this far — is that you are so protected when no one knows who you chose."

While the season airs, fans muster up their own theories and often turn to blogs or other social media sites to share their predictions. Rachel said, "You’re in this bubble of 'I found my person. I’m so in love.' Production is still putting you up, but the bubble bursts when you have to say, 'This is who I picked.' All these opinions come flooding in about what you should or shouldn’t have done." 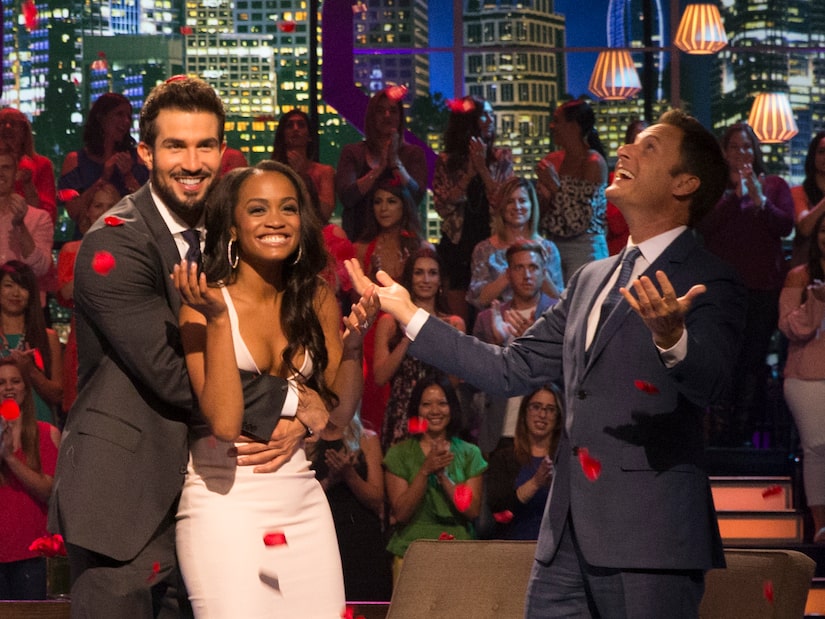 The Season 13 Bachelorette revealed on the podcast, "I got so much backlash for picking Bryan even though I knew my decision and I knew I made the right decision."

She shared the story of their first big media day together in New York right after her season finale aired and how it tested their relationship's strength. She said that during their interviews, "everybody was asking us questions about the guy I didn't pick."

Rachel went on, "It became so heavy because I was still in a contract, so I’m not going to bite the hand that’s feeding me, but at the same time, I want to honor and protect my relationship. How do I respect Bryan but also respect the process?"

At one point in their tightly packed day, Rachel and Bryan "had to clear everybody out of the room and have it just be the two of us." She said, "I just bawled. I needed a good cry. I was so frustrated, and we just held each other in that moment and were like, 'It’s us against the world. We know what we have. We need to ignore all the outside noise and be a united front and face this together.'"

Their team effort worked out just fine in the end. They got married on August 24 in Cancún, Mexico, and then jetted off to Greece for the romantic honeymoon of a lifetime.

To hear Rachel, Bryan, Becca and Garrett discuss their time after the show, be sure to listen to the full episode of "Bachelor Happy Hour" now. Don't forget to subscribe on Apple Podcasts, Spotify, or wherever you listen to podcasts!