As Rachel Lindsay says, "One decision can change the trajectory of your life." Just look at Becca Kufrin and Rachel as proof.

The two women answered fan questions on a new episode of "Bachelor Happy Hour," and one of them addressed what they thought their lives would be like had they never auditioned for “The Bachelor” and then become the Bachelorette. In her response, Rachel explained she asks herself this question on a regular basis, making sure to “always self-check.”

Rachel believes it's important to "self-check" in order to stay grounded in reality. Rachel explained the "trajectory" of her life changed when "someone walked into my office and said, 'Tryouts [for 'The Bachelor'] are down the street in two weeks. You should go." 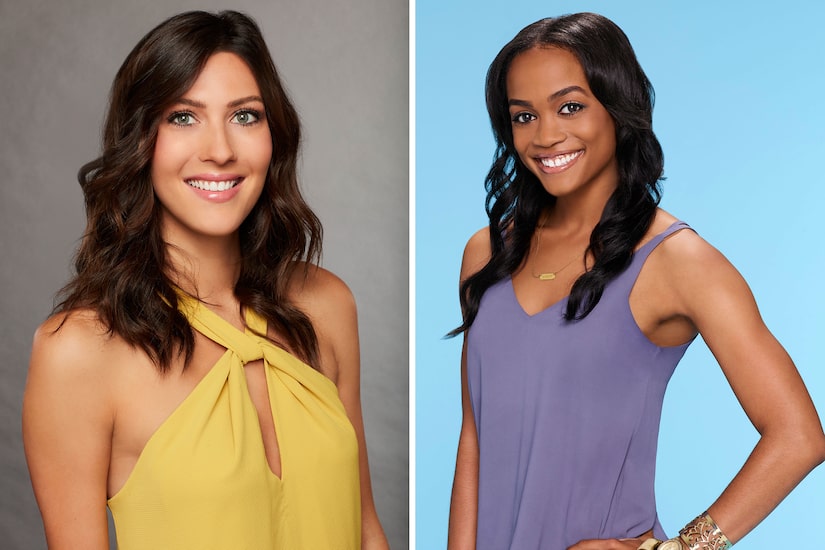 She went on, "If I hadn’t been the Bachelorette, I would still be an attorney. I would still be practicing. I have no idea what my love life would be like. I was coming out of a failed relationship, trying to hang on to the remnants of it even though I knew it was over."

Rachel reminded people that she continued practicing as an attorney after Nick Viall's season of "The Bachelor" and for a year after "The Bachelorette."

While Rachel remained confident in what her career path would hypothetically look like, Becca’s was more ambiguous.

Becca shared, "I was working as a publicist before the show. I felt like where I was at my agency, I had reached the end. I was ready for some sort of transition. Easy answer, I would probably still be doing PR for a lifestyle company or lifestyle brands. Would it be my dream job? Probably not."

The Season 14 Bachelorette offered up two very different responses for what her "dream job" would be.

She said, "In a perfect world, I’d be a homicide detective or book editor or something. Going back if I could do it all again, I would probably pick a different career path."

Becca feels grateful for the show and for her fiancé Garrett Yriyogen because without it, she "never would've moved out to California."

She added, "Thank God I did, because I love it out there. I’d probably still be in Minnesota dealing with the cold, depressing winters. It’s hard to tell. I probably wouldn’t have kids yet. I still had things I wanted to do."

Rachel and Becca both encouraged listeners, especially those who just graduated college, not to hold themselves back and not to "be afraid to step out of the box."

The "Bachelor Happy Hour" co-hosts also touched on their favorite and least favorite parts about being the Bachelorette. Becca discussed the “exhausting” filming schedule, saying, "I don’t think people realize how you’re always on and you’re constantly filming. Of course, every Monday you tune in and see a two-hour episode, but you’re filming almost 24/7. It's exhausting. You are always on the for the guys and the interviews. It's chaotic. You really don’t sleep for two months."

On a brighter note, the best part of the experience for her was "meeting Garrett" as well as "forming the friendships with the girls during 'The Bachelor' season that are still going."

Rachel explained the toughest part of the job for her was "when you got to that halfway point and sending people home. I underestimated how hard it would be to send people home."

She said, "I thought, 'I don’t know yet. It wont be anything to send you home.' I was wrong. Even if you don’t develop that love with them, you develop a friendship. You have this person who is pouring their heart to you, sharing these intimate details about their lives, and you know you’re not going to keep them. That was so difficult for me to encourage you to open up only to know this was only going to a certain point."

Much like Becca, Rachel's favorite moment throughout it all involved falling in love with Bryan because she was "so skeptical" about the process.

Rachel admitted, "I was open to love, but I was more like, 'I'm going to represent myself as a Black woman and maybe I’ll find love. I doubt it. There’s nobody they’re going to find for me on the show.' I was beautifully surprised. I am so happy that I took a chance, that I was open, and I found Bryan at the end of the day. It changed my life completely in every single way."

To hear what else Rachel and Becca have to say about their time as the Bachelorettes, be sure to listen to the full "Bachelor Happy Hour" episode now!