If anyone has learned anything on "Bachelor in Paradise," it's never to cross Jordan Kimball. David Ravitz, however, chose to ignore that.

David and Jordan's feud goes beyond the "Paradise" beaches. It started on Season 14 of "The Bachelorette" with Becca Kufrin, the two men clashing from the first night all the way until Becca sent Jordan home on a dreaded two-on-one date with none other than David. Perhaps neither one got over when David arrived the first night of "The Bachelorette" in a chicken suit and Jordan showed off his gold lycra underwear.

These two did not let bygones be bygones in Sayulita, Mexico, and it became all the more complicated when both Jordan and David had their eyes set on the blonde bombshell Jenna Cooper.

Jenna and Jordan immediately hit it off in "Paradise," and he appeared less than pleased whenever David spoke to her, especially on the night of the second Rose Ceremony. This episode of "Bachelor in Paradise" in Season 5 aired August 20, 2018.

Jordan arrived the night of the Rose Ceremony in a matching shirt and pants outfit that was red with yellow hibiscus flowers on it. Nearly everyone took it upon themselves to comment on his look. As it turns out, it's a "prototype," and even "comes in a full suit with a tie and jacket." Jordan has another one in blue, too. 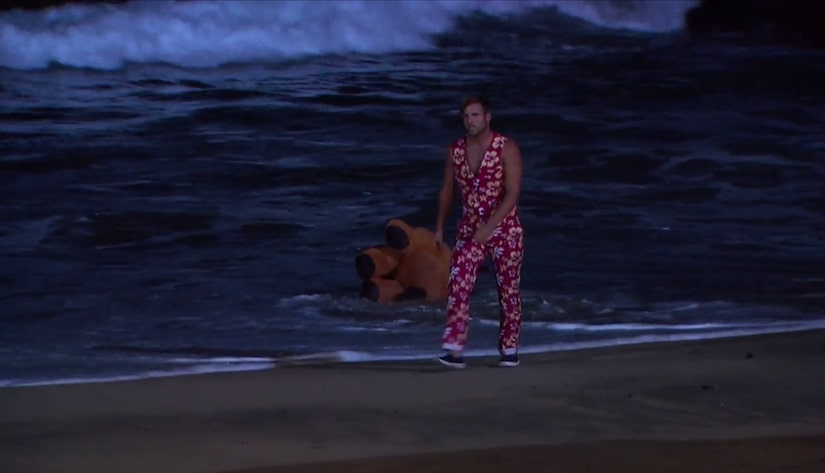 Before Jenna and David's chat on a daybed, Jordan showed off his modeling skills and runway walks her. He told her, "I enjoy your affection. You have a great personality. You’re beautiful. You’re the most stacked girl in 'Paradise.' I really just want to prance around the beach and show you off."

They kissed, and Jordan thought it would be smooth sailing for the rest of the evening.

David explained to the camera, "I haven’t gotten to know Jenna too well, but I know she’s really fun and really energetic. Celebrating Jenna’s birthday the other night brought me a lot of joy. A sweet girl deserves a sweet toy. This is going to go down in 'Bachelor' history as one of the best birthday presents ever given."

David led Jenna over to a bed and had her cover her eyes on the walk over. He presented a giant (we mean giant) stuffed animal dog in honor of Jenna's birthday. Jenna was surprised and pleased by the gesture, and the two decided to name it Brownie.

Jenna told the camera, "I appreciate the gestures. One of my love languages is gifts, so I’m like, 'I see you, David.'"

In the middle of their conversation, Jordan charged over to David and Jenna and grabbed Brownie by the foot. He proceeded to suffocate it a bit and then tossed it into the ocean.

David said, "Well, that was a short-lived birthday present."

Many of the other beachgoers gave their two cents on the matter, which Jordan didn't necessarily appreciate. 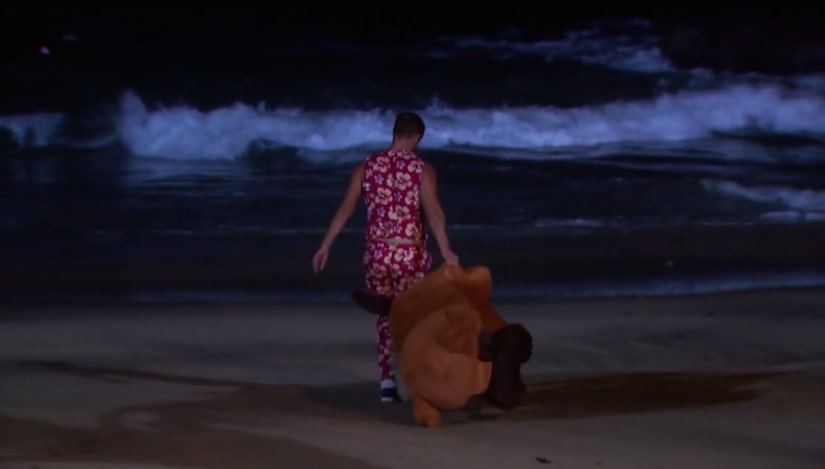 Caroline Lunny joked, "I don’t know anything about the dog, but Jordan looks like that Ken Barbie doll from 'Toy Story' in that suit."

Jordan said in a one-on-one moment, "I’m a pretty cool cat, just David, stop pushing me. He’s only here to sabotage what I’ve got going on, and Jenna played right into it."

Jordan and Jenna met up to talk about the events that just transpired. While that happened, Annaliese Puccini ran to the water to salvage Brownie's remains.

Jenna asked, "Is she saving it?"

Jordan responded, "It's dead now, so there's no saving it."

Jordan was taking no prisoners after his confrontation with David, and he made clear of that in a mini monologue before the Rose Ceremony.

"I’m confident, I’m f--king floral. You want to clap at me? OK, I’ll bring the thunder," he asserted. "David, you want to stand there and laugh at me? I will roast you over and over. You’re a set of brand-new tires, and I’m a Ferrari. Jubilee and Chelsea aren’t ready for a man, which is why they’re kicking it with David, chicken boy."