We've all been there: a bad date that never ends.

Maybe there’s no chemistry. Perhaps they look nothing like their dating profile picture. Or, you get there, and it’s just not that great. Either way, it can be an evening you’ll never forget despite how much you want to.

Lackluster dates can be dreary in the moment, but they often make for great stories down the line. Kristina Schulman joined Rachel Lindsay on a new episode of "Bachelor Happy Hour" and the two women shared dating advice, as well as some of their own romance horror stories. Becca couldn’t join the podcast due to a tornado warning, so Kristina filled in and didn’t disappoint

According to Rachel, "Bachelor Happy Hour" listeners are very curious about the hosts' "worst dating experience ever." She decided it was time to open up about one evening in particular and said, "To get back in the mindset of dating again — the good, the bad, and the ugly — Kristina and I are going to share our dating disaster stories." It was one tale she had never spoken about on the podcast.

Rachel called this the "worst date ever," and revisiting it required her to "go back into a time that I buried deep."

It all began right before Rachel started law school when she met a guy who was "maybe seven or eight years older" than her. 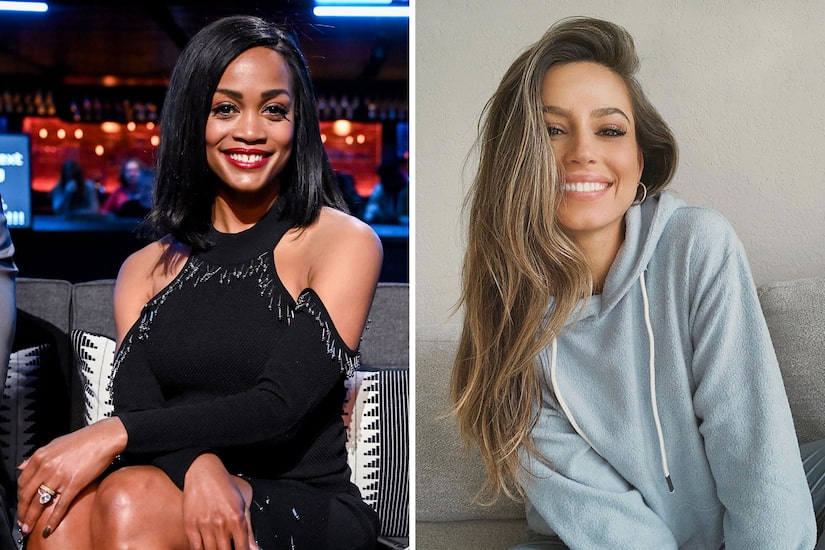 She said, "I was really in this mindset of 'I want to date older men because I’m going to law school, so I need an older, mature man.'"

Rachel and this guy went on a "great, fun" first date and said they were "clicking" really well.

She shared, "We’re having this deep conversation. When a date is good, you want to keep the night going. We go to dinner and then from there, we go to a bar lounge where we can dance. It was just smooth R&B. I’m pretty sure there was a live band playing. He was very smooth, very charming. I was like, 'Oh my gosh, I could so get used to this.''"

The guy told her he wanted to take Rachel "to this spot," but didn't elaborate or share any other details.

Rachel described, “He takes me to this spot and it’s on a really dark street. Mind you, this is a first date, so I don’t know him that well. He’s like, 'Here it is.' You could see some people outside. There’s a light, but the street isn’t well-lit and there are no signs. I thought, 'Maybe this is some secret, exclusive club. He’s older, he’s teaching me some things.'"

They entered, and Rachel said it was "a place where I immediately wanted to turn around and run out."

Why? She revealed, "It was a swingers' club. I walk in and I’m like, 'These people look really friendly! Wait a minute, what are they doing behind those curtains?' I was mortified. I drove, so I followed him so we weren’t in the same car. I bounced out of there as quickly as I came and never talked to that guy again.'"

Kristina admitted there was no way she could top Rachel’s story. She shared a moment from a time when she first moved to California a little over a year ago.

"I meet this guy and we just click, and he wants to take me out on a date, so I’m like, 'OK, I’ll go. I’m broadening my horizons,'" she said. "We go on a date and it goes fairly well. I was thinking, 'Maybe I’ll see him again, but if not, I’m totally fine with that, too.' Well, he decides to ask me on another date and I said, 'Fine.'"

She said him asking her out again was "kind of on the spot." The guy followed up multiple times, but Kristina kept saying she was busy.

Kristina said, "We go to a couple of the same events and we keep bumping into each other. I was like, 'Oh, damn. I guess I have to go on this date with him.'"

Kristina, a newcomer to Los Angeles at this point, was not used to the city’s traffic and showed up to the date at popular sushi restaurant Sugarfish a few minutes late and "flustered."

She shared, "I was in a rush and I hate being late, so he reaches over and grabs my hand, and I was like, 'Don’t touch me.' This meal is supposed to take an hour and a half, but I was out of there in 40 minutes."

The true breaking point happened when he asked, "Are your eyelashes real?"

She concluded, "At that point, I was like, 'I gotta go.' He walks me out and he tried nudging me towards a fountain where you can throw coins in and I just said, 'Thank you for dinner. Bye.'"

To hear more of their dating stories and their advice, be sure to listen to the full "Bachelor Happy Hour" episode now!