Rachel Lindsay made history in 2017 as the first Black Bachelorette, and since then, she’s paved the way for men and women to feel represented within the "Bachelor" franchise.

Rachel got her start on Nick Viall’s season of "The Bachelor," where she received the First Impression Rose and made it to his final three before getting sent home in Finland. After that, she was announced as the Season 13 Bachelorette.

Monday’s episode of "The Bachelor: The Greatest Seasons — Ever!" focused on Nick’s time as the leading man, and Chris Harrison took time to speak to two other "Bachelor" alums, Natasha Parker and Tayshia Adams, who look to Rachel as a role model and trailblazer.

Chris asked the women what specific part of Rachel and Nick’s relationship "resonated with Bachelor Nation" so much. Natasha started off, "First of all, her energy. I feel like every time I saw Rachel on the screen, she just had the biggest smile. She was always giving it her all."

Tayshia compared Rachel’s experience on the show with her own life growing up in Orange County, California. She said, "This is my world. What I mean is that I’m very used to being the minority. Seeing someone on TV have such a strong role and identify with me meant so much."

She also appreciated that Nick was "so open to meeting her family" and embraced their date even in the uncomfortable moments, such as when they went to church.

"I loved that she did exactly that because that is her," Tayshia said. "That is going to be their reality outside of the whole thing."

Natasha credits Rachel as a major reason why she appeared on Peter’s season of "The Bachelor" in the first place. 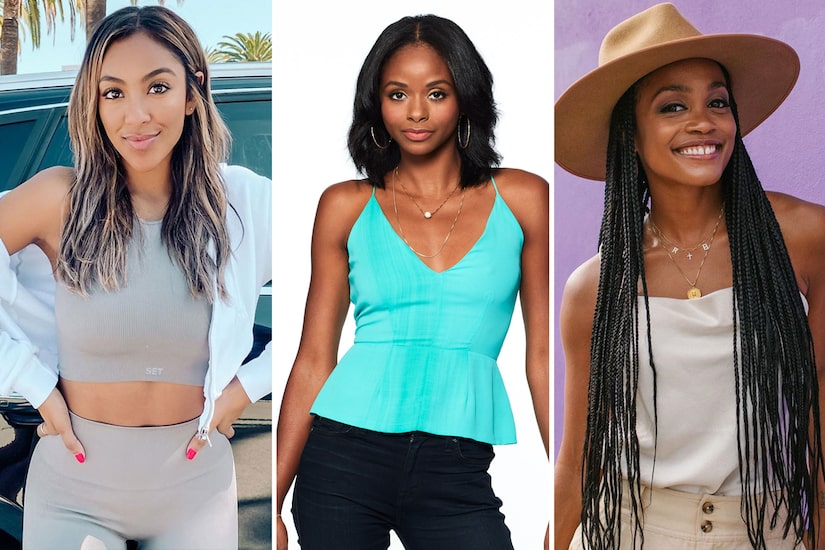 Natasha added, "It was a huge inspiration see her do this and she was one of the bigger reasons why I was comfortable to go on the show."

Tayshia said Rachel "gave us hope" that "fairy-tale endings" were possible for Black women on "The Bachelor" and "The Bachelorette."