Jade Roper and Tanner Tolbert's romance was written in the "Bachelor in Paradise" stars.

They met and fell in love on Season 2 of "Paradise" and were the first couple from the spin-off show to get married. Jade and Tanner are synonymous with success on "Paradise" as well as any other "Bachelor" show, and their love story reached a pivotal point on the season finale, which aired September 7, 2015.

Everything appeared bright and cheerful on the surface for the remaining couples heading into Fantasy Suites that last week of "Paradise." Kirk DeWindt, however, threw a wrench into things when he blindsided Carly Waddell and broke up with her. This made the rest of the women question their own relationships with the guys and wonder if the same thing would happen to them right before a potential engagement.

Jade walked into her final date with Tanner with some hesitation, calling Kirk and Carly's breakup "devastating." She stressed about her relationship with Tanner and kept a guard up, but Tanner immediately put her at ease with an affirming speech.

He told her, "I feel very strongly about you. I hope you know that. I think you know that. I like all the different facets that you are. I think over the last week things have gotten even more real for me. I love you, Jade. One hundred percent."

Tanner continued, "It’s crazy to think about because my mind is saying, 'What the hell are you doing Tanner? You haven’t known this person that long,' but my heart is telling me that the feelings are real and I do love you. It’s weird to say.'

Jade flashed a huge smile and responded, "It feels really good to hear you say that. I feel misunderstood a lot and I feel like you totally do. It blows my mind because I’ve never felt like that. It’s really hard to say the words, but I love you too, Tanner."

In an aside to the camera, Jade said it "feels good to know where he stands" in their relationship.

The next day, Tanner and Jade met for the final Rose Ceremony on the beach. As they held hands, she said, "Coming into 'Paradise,' I didn’t have any expectations of meeting anybody, let alone falling in love with somebody. I was totally skeptical and this has been so unexpected in the most wonderful way. I’ve never met somebody who makes me feel the way I feel when I’m with you." 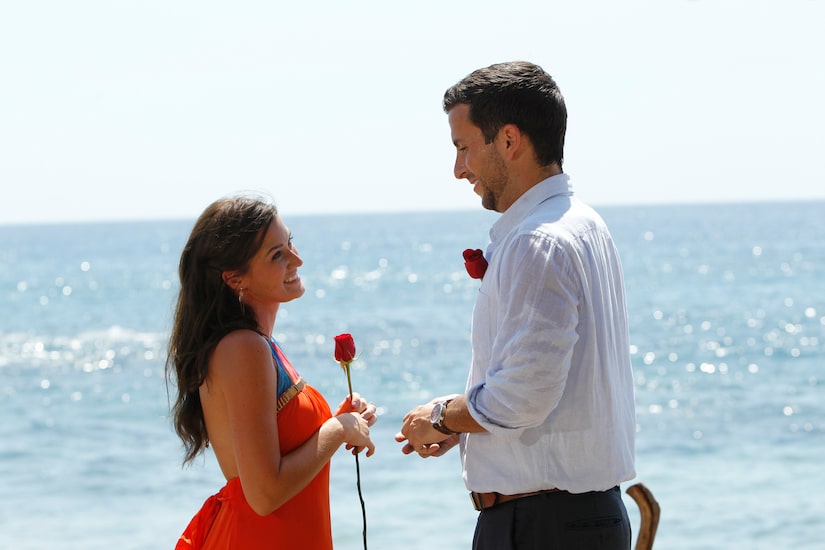 She went on, "I love so many things about you. I love how our mornings are our favorite time and you make me feel the most beautiful woman in the world."

Tanner chimed in and said, "You are."

Jade continued, "And worthy and understood, which I don’t think I’ve ever felt from a man before. Although 'Paradise is ending,' I have a sense of peace about it because I know that we want to work on a future together. I love you so much."

After Jade pinned the rose on his shirt, Tanner picked up his rose and expressed, "As you know, I came to 'Paradise 'expecting nothing but free drinks and a good time on the beach. But then I met you and that changed everything for me. Paradise with you has been truly perfect. But when I think about the real world, it’s different. I can’t give you this rose today."

Tanner put down the rose, momentarily confusing Jade before saying, "Because what we have is worth so much more than a rose — than a million roses. I love you, Jade, and I want to keep loving you for the rest of my entire life. Will you make me the happiest man on earth and marry me?"