Joe, for instance, dabbled in stand-up comedy but admitted he "failed miserably" at it. Hannah Ann swears she once saw a ghost in her kitchen. Tayshia played coy about her "Bachelorette" trailer appearance.

Therefore, it’s no surprise that guest Fortune Feimster upped the ante even more when she revealed an epic story about spending Thanksgiving with Jennifer Aniston.

Joe asked Fortune if she had a "pivotal moment" in her career when felt like she was "on the right path." She shared a story about how she had left Chelsea Handler’s show "Chelsea Lately" and tried acting, including in a pilot with Tina Fey that never got picked up.

Fortune worked with the "30 Rock" creator on another pilot about Fortune’s life called "Family Fortune" that also did not get picked up for television. She called working with Fey "such a good experience," but was "devastated" about the show not working out.

Here's where Jennifer Aniston comes in.

She said, "I got to shoot a movie called 'Office Christmas Party.' I filmed all my scenes with Jennifer Aniston where I was an Uber driver and she was in the back seat, and they basically were like, 'Do whatever you want,' and they let me make up the entire scene. She just had to react to whatever I was doing."

Fortune continued, "Just to be sitting there in a car on a back stage in Atlanta with Jennifer Aniston for three hours and we’re making this thing together. I watched her on 'Friends' growing up. I can’t believe this is my life right now, and she’s trusting me to make up this whole scene. They ended up putting all the stuff we made up in the scene. It was really cool."

The "Click Bait with Bachelor Nation" hosts asked if Fortune felt starstruck or nervous about working with someone as high-caliber as Aniston, and Fortune said that an experience a few years prior made everything a bit easier. 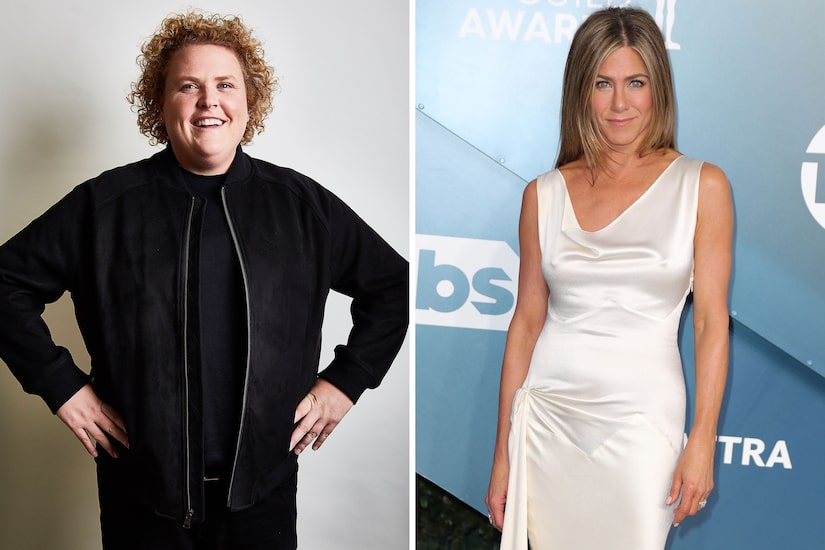 Fortune shared, "When I was on 'Chelsea Lately,' Chelsea was like, 'Do you want to come over and eat Thanksgiving [dinner] at my house?' I was like, 'Yeah, sure, why not?’ I walk in the door and there’s Jennifer Aniston and Justin Theroux, who she was with at the time. I was like, 'Oh, hi.'"

She continued, "There were like 10 other people and everyone got their plates to eat and everyone else was too nervous to sit beside Jen, so I was the last person with the plate and the only open seat was next to Jen. Chelsea goes, 'Oh, God. Don’t embarrass me!' So I sat down with Jennifer Aniston and I’m trying to not eat like a beast. I’m being all prim and proper."

Aniston turned to Fortune during dinner and asked if she tried any of the Greek salad yet.

Fortune said, "I go, 'I did.' She goes, 'Oh, I made that.' I go, 'I love Greek salad. I love it. This is the best Greek salad I’ve ever had in my life!' She was the nicest person in the whole world. It was so lovely. Cut to five years later and I walk up to her and she’s like, 'Fortune!'"

To hear more about Fortune Feimster's career in comedy, as well as other fun stories, be sure to listen to the full "Click Bait with Bachelor Nation" episode now!