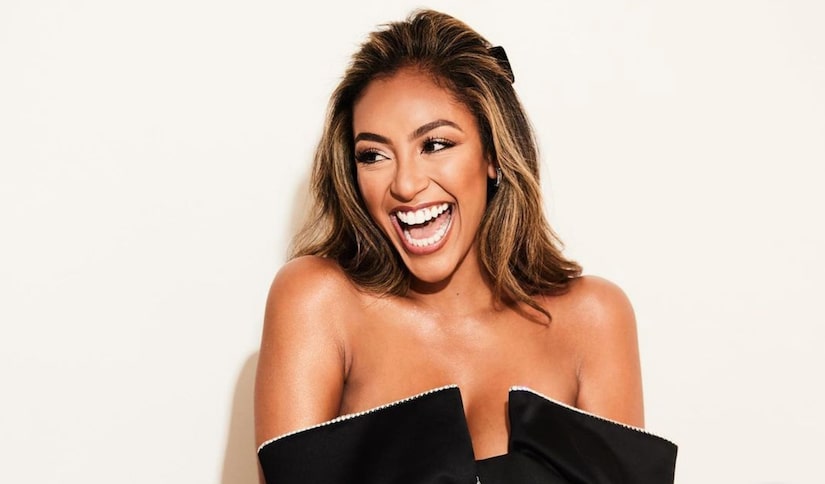 Tayshia Adams just had the night of her life.

As viewers of Monday’s inaugural MTV Movie & TV Awards: UNSCRIPTED ceremony witnessed, she accepted the honor for Best Dating Show on behalf of herself and everyone who contributed to making her and Clare Crawley’s Season 16 of “The Bachelorette” exceptional.

“It’s so crazy to me. I’m still on such a high,” Tayshia tells BachelorNation.com in an exclusive interview, acknowledging the fervent support of franchise acolytes who helped make the victory possible. “This is a fan-voted award show. To know that there is that much love out there for me and our season of ‘The Bachelorette’ means the world to me.”

She adds, “There’s a reason I thanked Bachelor Nation, specifically, in my acceptance speech. Because of them, I had this incredibly surreal experience.”

It wasn’t just a win that Tayshia walked away with last night. Sure, her Golden Popcorn symbolizes an unexpected feat over stiff competition and it’s certainly a gleaming reminder of great things to come. “This is truly just the beginning,” she states, her voice smooth and confident. “I know that.”

For Tayshia, the trophy is also an emblem of indelible memories captured in the span of mere hours.

Before hearing “The Bachelorette” called inside the Hollywood Palladium, Tayshia floated through MTV’s unscripted affair in a procession of designer dresses by Oscar de la Renta, Versace, and Magda Butrym. Her three looks, each distinctly glamorous, were photographed ahead of time for Cosmopolitan, her expansive suite at the Four Seasons Hotel in Beverly Hills serving as the backdrop. Later, she rubbed elbows with reality TV royalty and presented an award to Trevor Noah, an “idol” of hers.

“I was on my balcony, overlooking beautiful L.A., and thinking to myself, ‘This is absolutely wild.’ Then the show was even better than I could have ever dreamed,” marvels the Orange County, California, native, whose best friend accompanied her to the event, as fiancé Zac Clark was away on a work trip.

“Even talking to you right now about how amazing the night was, I feel like I need to pinch myself,” she admits, her signature laugh sparkling exactly as it did on the MTV stage. “Like, did that all actually happen?”

Below, Tayshia chats more with BachelorNation.com about her magical evening, reflects on her unprecedented “Bachelorette” journey, and reveals where she plans to keep her award.

This is your second time presenting at an award show following the 2020 American Music Awards. How did your MTV experience compare? Did the fact that you were nominated add any extra level of nerves or excitement?

The AMAs didn’t have a red carpet because of COVID-19. This time, I was looking around and watching all the people that I watch on my television screen just standing there, being like, “Hi, Tayshia!” It was so weird. It was crazy. Inside the show, I was freaking out! The fact that I was nominated was a surreal feeling and seeing our category against a lot of other dating shows and then winning was just a blessing.

You presented the award for Best Talk/Topical Show. As someone who is pursuing a career in hosting, did that feel like a wink from the universe?

What was it like presenting the Golden Popcorn to Trevor Noah?

Unfortunately, he wasn’t there. He Zoomed in. But I have been such a fan of him and what he brings to the table. He’s definitely an idol of mine. He’s so intelligent, but his delivery is very charismatic and relatable. He brings realness and truth to important topics. I have so much admiration for him, so that was really cool to present that to him.

Tell me about the moment “The Bachelorette” was named the winner of the Best Dating Show category. You were up against a number of popular series, including “Love Is Blind,” “90 Day Fiancé,” “Ex on the Beach,” and “Ready to Love.”

I feel like we’re in our own little world. Sometimes I don’t realize Bachelor Nation is as big as it is. I don’t know how to explain it because “The Bachelorette” was my life. It wasn’t a TV show to me, you know what I mean? So, for it to be presented among so many shows that I binged over quarantine is just so surreal. Those are shows that I learned from and watched and fell in love with and I got attached to. So, for me to also be included in that list was just, like, whoa.

Your remarks on stage were so eloquent. Did you have an acceptance speech prepared?

No, I didn’t have an acceptance speech ready! I’m not going to lie. I wanted to win but I just know how big those other shows are. I was like, “I feel like ‘Love Is Blind’ has it or something else.” For them to say “The Bachelorette,” I just remember thinking to myself, “You have got to be kidding me!” I screamed! Thank God my best friend was there. I looked at her and I freaked out.

This award show is particularly special because it’s fan-voted. How does it feel to know there is so much support out there for you and the franchise?

I don’t think I would continue doing what I was doing if Bachelor Nation wasn’t so amazing. They’ve been with me every step of the way. They truly have helped motivate me and they keep me going. Just the love and support that I’ve gotten since day one has been extremely overwhelming. It’s the fans and it’s the people that are behind the cameras. Those people are my family, practically. But, also, the fact that I have so much support all over the world, it seems sometimes, is just so amazing to me. I told Bachelor Nation, “It is time to rally. Let’s win this and let’s take this home because we deserve it.” I told them, “Let’s show up” — and, sure enough, they showed up! I’m so grateful.

Where do you plan to keep your award?

Right above my television. I want to see it every single night.

As you should! That way, you can manifest more awards in the future.

Exactly. (Laughs) You know, I’m not a fortune-teller. I don’t know what’s going to happen. But, like I said, I have a feeling that this is just the beginning. I have so many more dreams that I’m going to go after — and I know that I’ll achieve.

How did you celebrate following your win?

I went out and got a really nice dinner. I splurged, got some lobster ravioli and a cocktail! The first thing I did, though, was call Zac and my loved ones and tell them that we just won a freaking award.

How did Zac and your loved ones react to the news?

They were screaming and so excited! They said that they knew we were going to win — but I’m like, “How did you know?!” They were just so incredibly proud and told me, “That’s what happens when you put your heart on your sleeve. You just showed the world you.” They were so incredibly happy for me.

This was MTV’s first unscripted ceremony and, from listening to “Click Bait” every week, it’s obvious that you’re a big fan of other reality shows. What was it like being in the same room with other reality TV superstars?

Are you freaking kidding me? The entire cast of “Bling Empire” was there. I died! All of “Selling Sunset” was there. Erika Jayne! She was sitting next to me and looking hotter than ever in this python teal number, and I was so in awe of her. Bretman Rock was there. I love him. It was just so surreal that I was surrounded by all those people. It’s crazy to me! Like, I forget that I’m on TV, too.

Did anyone make you starstruck? Did you strike up any conversations or new friendships?

The whole cast of “Jersey Shore” was there. Also, the Bella Twins were there and it’s crazy because I’ve actually have had quite a few of these people as guests on “Click Bait.” So, the fact that I actually had some relationships with these people already and we were able to have great conversations and reconnect was, again, so surreal to me. Because with COVID-19, everything has been so virtual. You don’t really get to have a personal human connection. But then when you see these people in real life, it’s like, “Yeah, I do know you!” And it’s another reality check for yourself.

Your run as the Bachelorette ended phenomenally with an engagement to Zac. But your season also stands out because you allowed it to be a conduit for conversations about racial identity and mental health, among other important topics. Does this MTV award provide any extra sense of validation for how you handled your journey on the show?

My internal pressure was to represent for people and just be real and be honest. I feel like winning this award just shows that people were able to relate. This past year has been such a heavy year and there’s much divide amongst humanity. At the end of the day, we all have so much in common that we don’t realize. We can all relate on so many different levels. It may not feel like it, superficially, but we all can learn something from each other. With me being the Bachelorette, I just wanted to be the best version of myself and the real, authentic version of myself. This award really goes to show that when you are you and you just lay your heart out on your sleeve, it all works out. People appreciate that and they love that.

Do you have any words for Clare, who also shares in this award?

Clare plays a big part in this as well. Clare was very true to herself. She got what she wanted out of it. Although her journey was different than mine, I’m sure she has still learned so much and she still had an amazing outcome. Honestly, I am so incredibly thankful for her because she is a big reason as to why I’m here and became the Bachelorette. She was true and authentic to herself, and things work out how they’re supposed to.

When you were first cast on “The Bachelor” in late 2018, could you have ever imagined that you would eventually become an award-winning lead of the franchise? 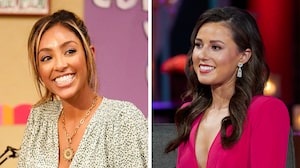 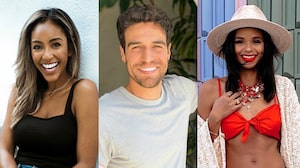 Tayshia, Joe & Natasha Discuss: How Wild Would You Let Your Partner Get at a Bachelor Party? 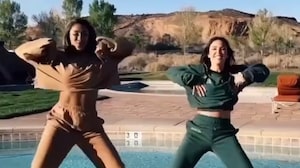