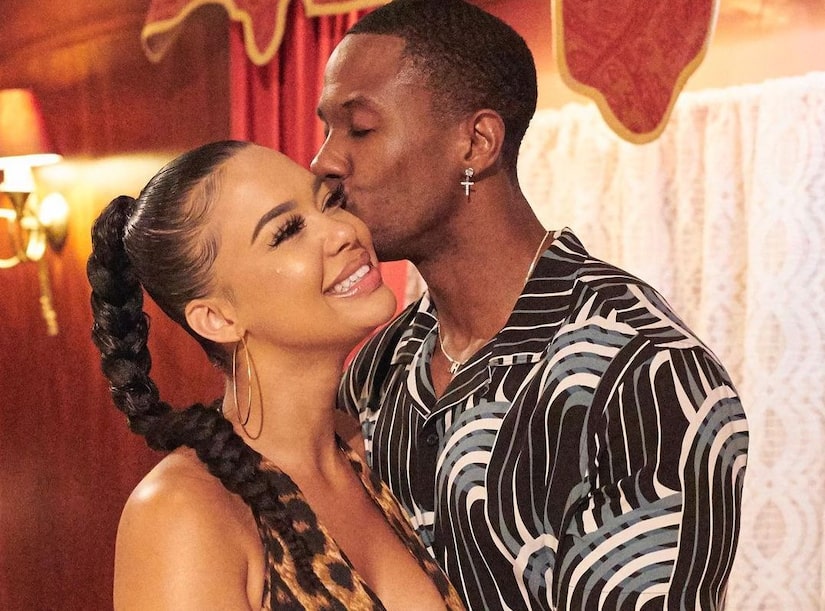 Fans have gotten to watch Bachelor Nation stars Riley Christian and Maurissa Gunn fall for each other during Season 7 of “Bachelor in Paradise,” but even the strongest couples are facing online haters.

As soon as Riley stepped foot on the beach, it was clear he and Maurissa had an instant connection. Riley used his date card to take Maurissa on a one-on-one date and sparks were flying the entire night.

Lance Bass led them in a game where they had to answer a question or eat a disgusting food item. Despite having to consume things like tongue and chicken feet, Riley and Maurissa had a ton of fun. Their connection was palpable, and they shared a steamy kiss between bites of bizarre food.

After their date, Riley and Maurissa spent the night together in the famous Boom-Boom Room, and the Internet had a lot of say about it. While a lot of fans showed support for the couple, Maurissa unfortunately also faced shamers.

She took to social media and wrote, “Sex is a 2 person act, so there shouldn’t be a double standard regarding which gender can openly like it, and which gender should be timid about their enjoyment. What’s even harder to believe is that the majority of the negativity and hate is coming from women. It’s already hard enough being a woman in today’s society, so we as women should do everything to lift each other up rather than bring each other down.”

Riley also took to his IG Stories at the time to defend Maurissa and spoke out again on this week’s episode of “Bachelor Happy Hour.”

When Becca Kufrin and Tia Booth asked what he had to say to the haters, he didn’t hold back.

The Bachelor Nation star said, “First things first, we’re grown, so mind your business, okay? We came out to ‘Paradise’ because we are looking to be in committed relationships. We are trying to find love.”

Riley added that he and Maurissa are both consenting adults who were into each other physically and also emotionally.

He noted, “At the end of the day, this is how me and Maurissa felt about one another. There was obviously physical chemistry. There was emotional chemistry as well, and it just led to the Boom-Boom Room, which is where you want it to lead.”

Riley also said he feels that most people trying to have a successful relationship want to have sexual chemistry, so “if you can get there and it’s great, good for you. And it was good for us.”

Becca, who witnessed Riley and Maurissa’s relationship firsthand in “Paradise,” noted that the experience led to one of the strongest relationships on the beach, to which Riley responded, “When you know, you know.”

As of now, the two are still going strong, and only time will tell if they make it until the end. Either way, Riley and Maurissa are allowed to make their own decisions about what’s best for them and their relationship.

To hear more of Riley’s conversation with Becca and Tia, check out the latest episode of “Bachelor Happy Hour” below. ‘Happy Hour’: Lance Bass on Why He Was ‘Honored’ to Host ‘Paradise,’ Plus: His Predictions for Who Gets Engaged