Fans met Bachelor Nation star Demar Jackson on Season 16 of “The Bachelorette,” and now he’s back on the beaches of “Bachelor in Paradise” looking for another shot at finding love.

Demar may have joined “Paradise” on the later side, but he’s made it clear he’s there to find love and isn’t focused on the drama.

Demar opened up to the “Click Bait with Bachelor Nation” podcast about his time in “Paradise” and discussed how he prioritized Chelsea Vaughn, who he took on a date, over getting involved in the drama between Ivan Hall and Aaron Clancy over Chelsea’s rose.

And while Demar has made his stance on drama clear in “Paradise,” the Bachelor Nation star took a moment to reveal where his loyalties lie when it comes to life’s simple pleasures.

Demar shares more about himself exclusively with BachelorNation.com in a fun round of “This or That.”

Get to know Demar a bit better below!

FaceTime? But let's go with call!

Side part, I don't really do too many parts for this type of hairstyle.

Cocktails... Unless we're talking mimosas on a Sunday!

Dine in, I want the full experience.

Athleisure-wear, that's me on the daily.

Winter... Give me colder temps pleaseeee! 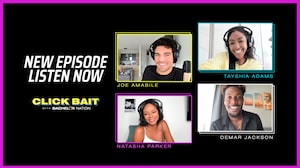 ‘Click Bait’: Demar Jackson Discusses Joining ‘Paradise’ Late in the Season, Plus: Why He Stayed Out of the Drama Between Aaron & Ivan