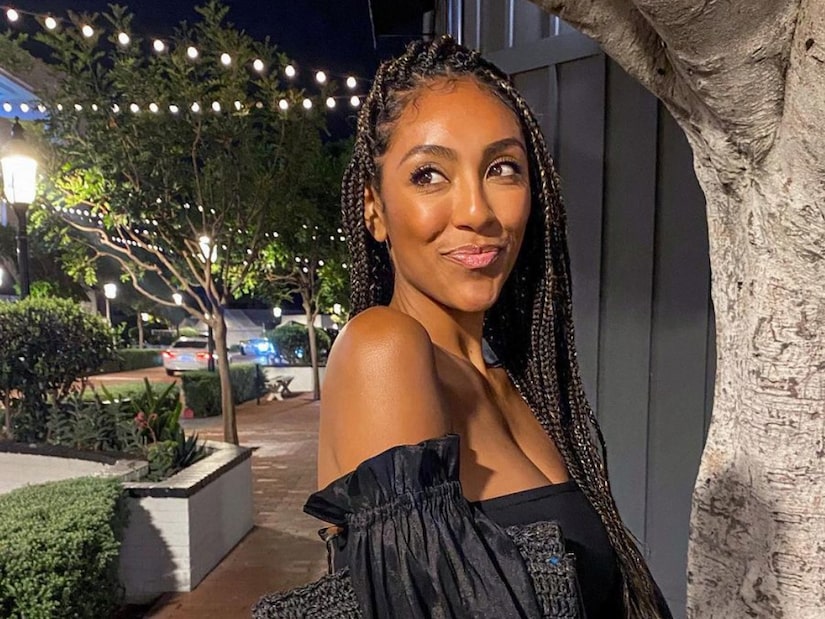 After over a year of being engaged, a rep for Tayshia confirmed that the two were “no longer a couple” after rumors circulated about their relationship status.

And on last night’s “Men Tell All” episode of “The Bachelorette,” Tayshia spoke out about their split for the first time.

She left the stage crying after revealing that she was heartbroken and still working through their breakup.

Now, the “Bachelor Happy Hour” co-host opened up about where she’s at during this week’s podcast.

Tayshia said, “I am definitely hanging in there. That day was really tough for me because that was the day the news kind of broke to everyone. It was just very heavy, but I had a job to do at the same time. So I was happy to be surrounded by all of you guys and be supported by that, though it didn’t make it any easier.”

The former Bachelorette continued, adding, “I really said all I had to say on that stage. I don’t really have anything to add to it because I’m still going through it all. I spoke my piece, and one day when I feel like I have more to say, I’m sure we can talk about it all.”

Becca assured Tayshia that she has her love and support and asked fans to give her the same grace.

Becca chimed in, saying, “I would please ask everyone to give you time and patience and the space to heal from this. I understand going through a very public breakup. Breakups are never easy in general, but when you have such a public platform and everyone’s comments, criticisms, and opinions get you, it makes it that much harder.”

Becca continued, “Please give Tayshia some support, throw a prayer her way, and just know that you have so much love behind you. We’re wishing you both the best, and it’s life. These things happen. Hopefully you can learn and grow and move on from that.”

We’re sending both Tayshia and Zac love as they navigate this new chapter. To hear Tayshia and Becca’s full conversation, check out the latest episode of “Bachelor Happy Hour” below.