After Teddi’s tearful goodbye at the end of the Rose Ceremony, Clayton officially found his final four women.

Next week, he will be visiting Rachel, Gabby, Serene, and Susie’s hometowns to meet their families.

In the teaser for next week’s episode, Clayton says, “I can’t believe I’m meeting their families. That’s a huge step in a relationship.”

Rachel is heard saying, “I hope the family can see the person I see and they can see how happy I am,” and Gabby shared a similar sentiment, adding, “I’m so excited for him to get to know where I came from.”

But amid the excitement, Rachel also shares her concern, saying, “There are people here and I don’t know where his relationship is at with the other three women.”

Clayton faces concerns from the women’s protective family members, who are skeptical about him still having other relationships.

After Hometowns, we get a glimpse at how the rest of the season unfolds, and the drama continues to heat up.

Clayton reveals, “I didn’t believe it could happen, but I’m in love with three women” before confessing to two of the women that “I was in love with her and I am in love with each of you, and I also was intimate with both of you.”

He’s later seen talking to his parents and getting emotional over how things have unfolded.

Clayton’s dad tells him that the women “have a right to be upset” and says his son “put himself in this situation and screwed the pooch, in my opinion.”

The trailer ends with Clayton saying, “I wish I never would’ve fallen in love. I’m so broken.”

Make sure to tune in next week to catch the Hometown visits. Watch all the love and all the drama on “The Bachelor” Mondays at 8 p.m. on ABC or stream the episodes on Hulu. 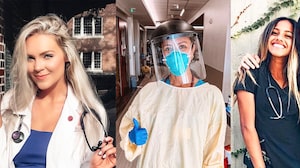 ‘The Bachelor’s’ Health Care Workers Share What They’ve Learned About Themselves Amid the Pandemic, Plus: Their Tips for Staying Healthy 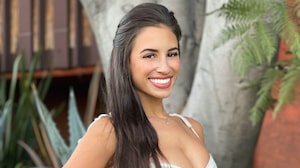 ‘The Bachelor’s’ Genevieve Reveals Why She Blew Up at Shanae, Plus: Why She Was the Best Person for their 2-on-1