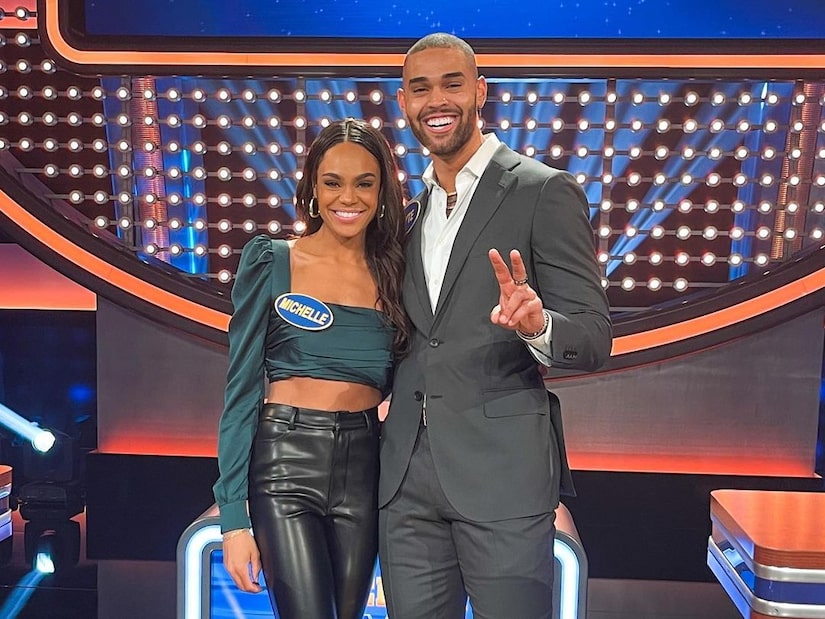 Alongside Michelle and Nayte were other “Bachelor” and “Bachelorette” stars set to compete against one another, including Joe Amabile and Serena Pitt, Mari Pepin and Kenny Braasch, Becca Kufrin and Thomas Jacobs, and Mike Johnson and Rodney Matthews.

“Family Feud” host Steve Harvey led the two teams, which were split evenly, with Becca, Thomas, Mari, Kenny, and Mike on the “Bachelor Squad,” while Joe, Serena, Michelle, Nayte, and Rodney battled it out on the opposing side.

Although each of the contestants have already competed for love on national television in years past, competing on “Family Feud” was a whole different dream come true for the group, who each shared details about the experience on Instagram.

Mari captioned her series of photos, “It’s my absolute favorite game show and I’ve always said I wanted to be on it one day,” while Nayte felt the need to humble himself, writing, “‘Celebrity’ is kind of pushing it for myself, but boy oh boy, what a day, and what an experience!”

Mike, who vied for Hannah Brown’s heart on Season 15 of “The Bachelorette,” also joked, “Nobody wins when the family feuds… except when Steve Harvey is in charge.”

Each of the couples has remained tight-knit after their respective seasons, and Rodney, who appeared on Michelle’s season, is now close friends with Michelle and Nayte.

Not to mention this episode of “Celebrity Family Feud” featured multiple couples that are currently going strong after being formed in “Paradise,” including Kenny and Mari, Joe and Serena, and Becca and Thomas.

“Celebrity Family Feud” has aired "Bachelor"-themed episodes in the past, which have always been fan favorites as Bachelor Nation loves being able to watch their faves compete in a whole different light.

While there is still no set air date for the upcoming episode of “Celebrity Family Feud,” the stars teased a date slated for sometime this summer, so be on the lookout for some fierce competition headed our way!