Now, the standout cast member stopped by the “Talking It Out with Bachelor Nation” podcast, where she opened up about the response to her time in “Paradise.”

Outside of her time on Bachelor Nation shows, Kira is lead physician of internal medicine at Penn Medicine.

And some people online have had negative things to say about her behavior in “Paradise” due to her career.

Kira got candid with co-hosts Mike Johnson and Bryan Abasolo about the criticism she’s been facing.

She said, “I’ve been seeing comments on Twitter and Reddit and I try not to go on those forums too much. Initially after the first episode aired, people were complaining that I am a doctor and how could I be acting like this? Later on, there were a lot of people coming out in support of me, and now the conversation is a lot more balanced.”

Kira went on, noting, “There are more people supporting me doing what I want in my private time and that is separate from my profession. That being said, nothing that I did on ‘Paradise’ was inappropriate or crossed any ethical lines. Even if the personal and professional were mixed, I never did anything wrong. I don’t see what the problem is.”

Kira also discussed how she thinks there is a double standard when it comes to her being comfortable with her sexuality in comparison to some of the male cast members.

She said, “I came in hot the first episode. I was in ‘Paradise’ ready to meet some people and flirt with some guys. And that was super controversial. But there was another person, Jacob, who also came in hot. He came in naked and was saying similar things to me and doing similar things, but I’ve heard zero conversation about him. It was all about me. I really saw it as a double standard there. We came in with similar energy, but I was the only one getting negativity from the audience.”

Kira continued on, explaining, “I think people are still uncomfortable with women owning their sexuality and not being ashamed of it. I think times are changing, but a lot of people still secretly or not so secretly hold some judgmental views about women and their sexuality.”

The Bachelor Nation star said that she spent the majority of her life up until this point really focused on her education and career and had to make a lot of sacrifices due to school.

She also knows that this time in her life is temporary before getting married and having kids, so she just wanted to have some fun.

To hear more of Kira’s conversation on “Talking It Out with Bachelor Nation,” check out the full episode below. 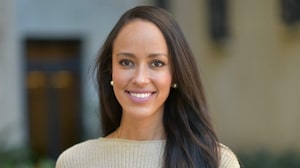 EXCLUSIVE: Kira Mengistu Opens Up About Her Career as a Doctor, Plus: Who She’d Like to Meet in ‘Paradise’ 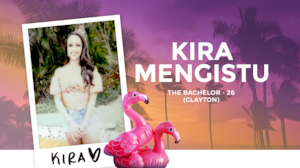 Paradise Profile: Catch Up with Kira Mengistu of ‘The Bachelor’ Season 26