“Bachelor in Paradise” was not the last we’ve seen of Demi Burnett on television.

Demi returns to the “Bachelor” world on Week 3 of the show, surprising the women and hosting a pillow-fight group date.

As previews show, she storms into Bachelor Mansion and yells into a megaphone, “The queen is back!” First week, the beast was back, and now the queen.

Demi also made a few cameos on Hannah Brown’s season of “The Bachelorette,” where she did some undercover work to try to find out who was there for the right reasons. 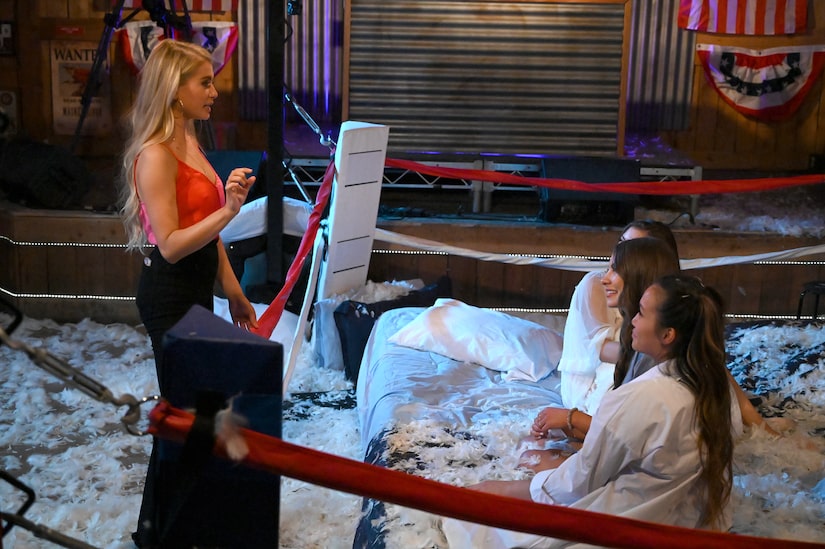 The Season 23 alumna joined Rachel Lindsay and Becca Kufrin on a new episode of “Bachelor Happy Hour” to discuss Peter’s group of women and some concerns she has about him. Becca asked Demi what she thinks “Peter’s biggest challenge in this process will be,” and Demi believes it relates back to intentions.

She responded, “I think it’s going to be hard for him to see who is actually going to be a good partner for him outside of this and who’s not just saying what they need to say and charming their way to the end. He deserves to find true love. That’s going to be the biggest challenge — making sure the girl has the purest intentions.”

Rachel pushed Demi to elaborate on her answer, asking if she felt this way because “you’ve met them or because you’ve watched them on this season?” Demi said she thought it was “a little bit of both.”

Becca brought up in the podcast that some guest group date hosts have a strong intuition for knowing if someone’s fiancé is in that group. For instance, “Bachelor” fans Mila Kunis and Ashton Kutcher hosted a date on Rachel’s season, and they told her they didn’t think her husband was in that group — and he wasn’t.

The same went for when Rachel made a cameo on Becca’s season. Garrett did not attend the date she hosted, and she told Becca her husband wasn’t in that group. Becca asked Demi if she felt Peter’s potential fiancée was in her group date, and Demi replied, “Probably not.”

She continued, “I think everyone was really insecure and jealous and aggressive. I didn’t get the vibe from anyone of ‘I’ve got this connection with Peter.’ Everyone was just very tense and ready to take down the other girl no matter the cost.”

In terms of her legacy, Demi doesn’t think anyone has filled her shoes “yet.” Right after the first episode of the season, she posted a gif of herself popping a bottle of champagne and wrote, “Cheers to whoever takes my throne this season.” Although Demi remains in control of her throne now, she is “sure someone will” take it over.

She also offered some of her initial first impressions of the women. The 24-year-old said she first “noticed they were all stunning,” but their attitudes differed from her season of “The Bachelor.” She shared, “It did feel weird because my group of girls, everyone was so nice and chill. I feel like we bonded really well, but when I saw them it was an awkward, cold energy.”

To hear more about Becca and Rachel’s impressions of Week 2 of “The Bachelor,” be sure to listen to the new episode of “Bachelor Happy Hour” now. Don’t forget to subscribe on Apple Podcasts, Spotify, or wherever you listen to podcasts.