Shaggy might be known for his hit song "It Wasn't Me," but it definitely was who Matt and Rudi met — and they couldn’t believe it.

On Monday's episode of "The Bachelor Presents: Listen to Your Heart," Matt and Rudi went on a date that saw them sing and dance onstage alongside the famous reggae artist. After the fact, they hung out with him backstage for a few minutes, where he provided the pair with songwriting advice and more.

In a newly released extended scene from their date, Rudi and Matt both beam over the fact that they met a singer from their childhood. Rudi calls their evening "so much fun" and Matt adds, "What a night. That was insane. We got to sing with Shaggy, we got to have a really amazing night with Rudi. I’m a happy dude."

Once Shaggy arrives to chat with them, Rudi tells him their date was "the cherry on top" of their experience thus far.

Matt says, "This has been the wildest ride." 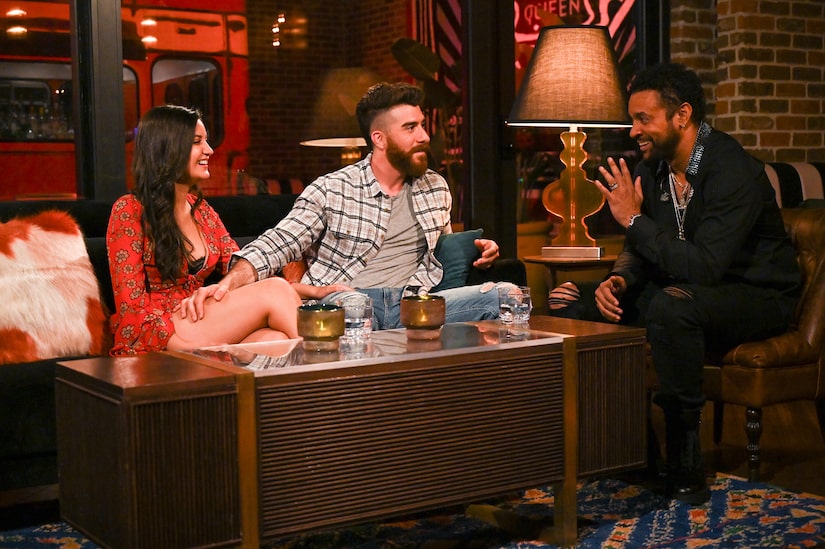 During their conversation, Matt and Rudi had no qualms about showing PDA in front of Mr. Boombastic. Rudi puts one hand on Matt’s thigh while holding his hand on her knee. Along with gushing over Shaggy, Matt can’t help but brag about Rudi’s immense talent. Shaggy inquires if they’ve been "singing and harmonizing" together and Matt responds, "It’s been incredible. She’s unbelievable."

He continues, "It’s so easy to make music with her because she’s such an amazing singer, the most accurate singer I’ve ever sang with. Technically, unreal. She’s unreal."

Rudi reciprocates the praise, and Shaggy commends them both on their skills. "It was great sharing the stage with you," he says. "I think your chemistry is wonderful and you’re going to make great music, timeless music."

Shaggy previously spoke with Rachel Lindsay and Becca Kufrin on an episode of "Bachelor Happy Hour" and revealed to the co-hosts he could tell Matt and Rudi "were really feeling each other and vibing each other."

He said on the podcast, "One thing I noticed when they came onstage — and that’s what got me watching the episode without me knowing anything — they couldn’t keep their hands off each other, which is good. They looked like they were in love."

Shaggy continued, "Even when they were rocking and dancing, he kept holding her hands. It was just that kind of vibe. I was really pleased to see that they actually interacted like that."

Watch the full video above to see Matt and Rudi freak out over Shaggy, and be sure to tune in to the season finale of "Listen to Your Heart" to find out what the future of their relationship holds!