A fair share of celebrities have appeared on episodes of "The Bachelor" and "The Bachelorette" over the years. Plus, there was the A-list group of judges on "The Bachelor Presents: Listen to Your Heart."

While these big names made cameos in the form of live performances or date co-hosts, it would be a whole different story if one of Hollywood’s most famous stood at the end of the Bachelor Mansion driveway meeting 25 to 30 love interests. Becca Kufrin and Rachel Lindsay discussed potential celebrity Bachelors and Bachelorettes while answering fan questions on "Bachelor Happy Hour," and they had a few in mind.

Becca started off with her top pick. "This is one I’ve said before and I’ve said it to his face, but I love Michael Strahan," she shared. "You know I love Michael Strahan. I know he has a girlfriend — at least I think he does. Regardless of where I am in my life, I would take a two-month hiatus to be on the show just to be around him."

Rachel agreed with Becca’s idea and complimented the "Good Morning America" co-host and former NFL star as being "so great." Becca offered her idea for a "Bachelor" season, and Rachel had her two cents on who she believed to be a great pick for Bachelorette. 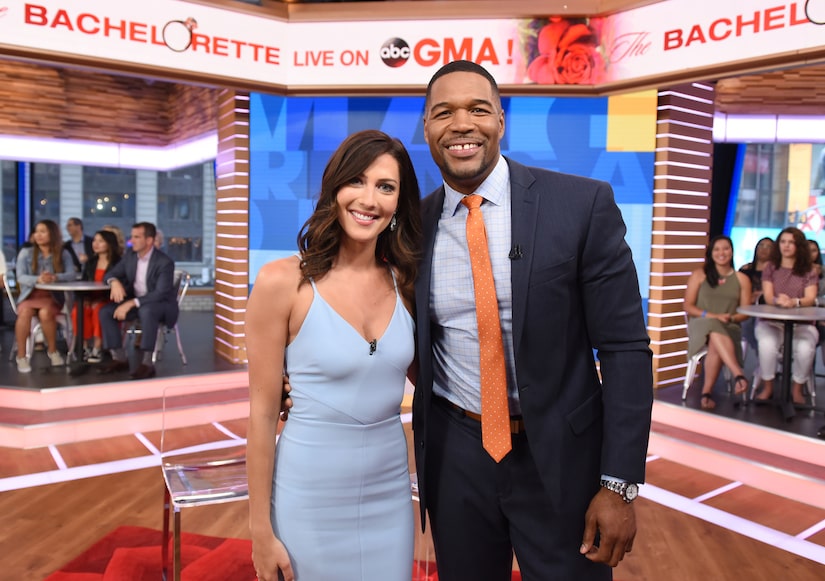 "My celebrity that I would love to see on is Rihanna. Hands down, Rihanna," she exclaimed. "She would run through those men. She could perform, sing, dance, whatever it may be. Rihanna just doesn’t care about stuff, just give zero f’s. We would get a Bachelorette who tells it like it is."

Rachel added, "The men would be so intimidated, and it would set the bar so high. I’m going for Rihanna."

Becca loved the Rihanna suggestion and also threw out Lena Headey, who played Cersei Lannister on "Game of Thrones," as an option. Becca said, "She would bust those guys’ balls. She would put them in their place. It would be so entertaining, but I would only watch it for the lead and no one else. She is so outspoken and takes no bulls--t."

Roses are coming, and those men better be in House Bachelorette! (She's also married.)

Becca and Rachel have some dream podcast guests, too. Becca would love for RuPaul to join the show, while Rachel put good juju out there for Michelle Obama.

Several celebrities are members of Bachelor Nation as well, including Kesha. The pop star was a guest judge on "Listen to Your Heart" and also spoke with Rachel and Becca on a "Bachelor Happy Hour" episode in April.

Kesha said on the podcast, "I’m a little geeking out because I have to tell you, I’m such a fan. I’ve been a secret fan for a very long time. My girlfriends and I always get drunk and watch 'The Bachelorette.' Always 'The Bachelorette' is way more entertaining. I love when the woman has the power."

She's not only a fan, but the "Timber" singer also argued she'd be "the most fun" Bachelorette.

When asked if she'd ever be the leading lady, she said, "Are you kidding? That’s like my dream. I told Chris Harrison, 'Listen. I have a boyfriend, but if it doesn’t work out, I’d be the most fun, bats--t crazy Bachelorette you’d ever have.'"

To hear the rest of the Q&A with Rachel and Becca, be sure to listen to the full "Bachelor Happy Hour" episode now!