It's the type of ending any "Bachelor" and "Bachelorette" viewer loves to see: A romantic proposal on the beach with professions of love and the promise by two people to spend their lives together.

Four years ago, Jordan Rodgers got down on one knee in Phuket, Thailand, and asked JoJo Fletcher to marry him on the season finale of "The Bachelorette," which aired August 1, 2016. They've been together ever since.

JoJo was smitten with Jordan ever since the first night of Season 12 at Bachelor Mansion. He received the First Impression Rose, which made him an immediate target of other men's criticism. He nonetheless focused on his own relationship with JoJo and asked her to marry him in a heartfelt proposal.

Jordan said in a voice-over in the car ride to the beach, "I always believed I would find this kind of love, and I never had a better feeling about this is exactly what I want. This is something that, as a man, I’ve thought about for as long as I can remember. What this would be like, who I’d spend the rest of my life with, where she was when I was growing up. Where was she? I found her."

He continued, "JoJo changed me. She made me look at myself differently. She made me look at what love is completely differently, and that’s why I’m here with the person I’m supposed to spend my life with. If she said no, it would be the biggest letdown of my entire life. If I get that answer that I’m looking for, it’s gonna be the best feeling in the entire world knowing that I found someone I want to spend my life with, and they want to spend their life with me."

When Jordan reached JoJo on a raised platform near the water, he told her it "took everything in me not to run down those stairs."

He began his proposal speech professing his love to her. 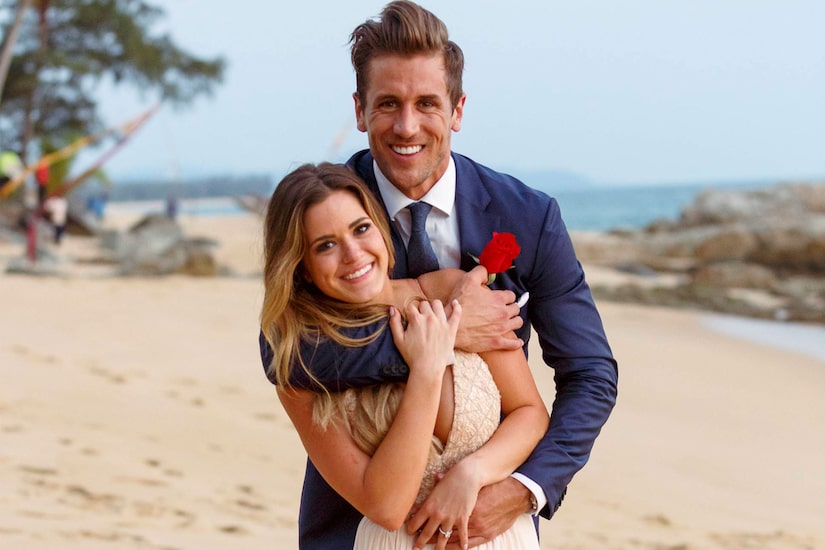 JJordan said, "I fell in love first with just us, just the person I could be right away with you. Just comfortable and confident and how you challenged me and continue to challenge me to be the best version of myself."

The former NFL player explained to JoJo that she helped him "believe that love doesn't need to have scripts."

He told her, "There are moments like this when we’re here holding hands, I’m looking in your eyes, and I know I’m so unbelievably in love with you. You’re my best friend. You’re my soulmate. I can keep you safe. I’m going to protect you. I’m going to wake up every morning and choose you over and over and over again until you tell me I can’t."

Before Jordan went any further with his speech, JoJo stopped him.

After that, he kneeled and asked for her hand in marriage.

"It’s real. It’s been real," he exclaimed. "I want to spend the rest of my life with you."

Watch the full proposal video above!