Clare Crawley’s one-on-one date with Jason on Tuesday’s episode of "The Bachelorette" struck a chord with Becca Kufrin.

Clare and Jason spent their time together opening up and getting extremely vulnerable about themselves and their past relationships. At the end of the night, Clare picked up the dress she wore on the last night of "The Bachelor" and they decided to throw it in the fire.

Clare called the finale "one of the most difficult moments that I’ve had to face in my life," but said she has healed and "this dress honestly means nothing to me."

She explained, "I love the fact that they burned the dress. I wanted to be right there with them. I still have my dress from ‘The Bachelor’ when I get engaged, and it’s just sitting there."

Arie Luyendyk Jr. proposed to Becca at the end of his season, but he broke up with her and went on to marry Lauren Burnham.

After Rachel expressed shock that Becca still possessed her dress, Becca said, "We gotta have a burn party! Somebody actually DM'ed me last year. She was getting married for the second time and wanted a black dress for the wedding and she’s like, 'Can I have it?' I was like, 'I don’t think you want that juju. I don’t think you want to walk down the aisle with this dress.'" 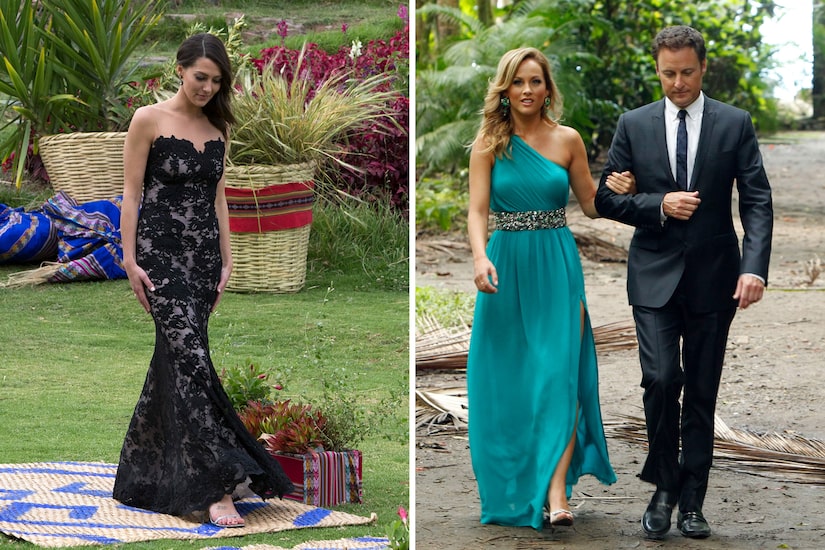 Becca is "all for it" in terms of having a "burn party," and said that it's something she and her friends in Minnesota have done in the past "when people break up with somebody."

In April, Clare posted a photo of her finale dress and explained why she kept it after all these years.

She wrote, "Fun fact: the entire zipper is shredded and unusable because I ripped this dress off as soon as I got in the car. HOWEVER! 2 reasons why I kept it: 1) Cary [Fetman] hand-beaded this and it meant the world to me. 2) It was the most empowering moment of my life."

To hear what else Becca and Rachel have to say about this episode of "The Bachelorette," as well as their interview with Eazy, be sure to listen to the full "Bachelor Happy Hour" episode now!