Tayshia Adams is a pro by now when it comes to answering tough questions and discussing them.

Olivia Ponton, however, threw Tayshia for a loop on Thursday's new episode of "Click Bait with Bachelor Nation."

The TikTok star joined Tayshia, Joe Amabile, and Natasha Parker for a discussion, and Joe explained that each week, he and Natasha get to ask Tayshia a "burning question" about her season of "The Bachelorette." The generously offered Olivia to take the reins and do the honors of asking it.

She inquired, "If your mom was choosing one of these guys for you, who would it be? Or, if you dad was able to give out the First Impression Rose, who would your parents choose?"

The Bachelorette said, "I’m gonna keep it to the First Impression Rose. My mom would’ve given it to Brendan because he’s super sweet."

Olivia asked if he was a "mama's boy" and Tayshia said she was spot-on.

As for her dad, Tayshia joked he would pick "probably nobody. He doesn’t like anybody when he first meets them. My dad would’ve been like, 'This guy?'" 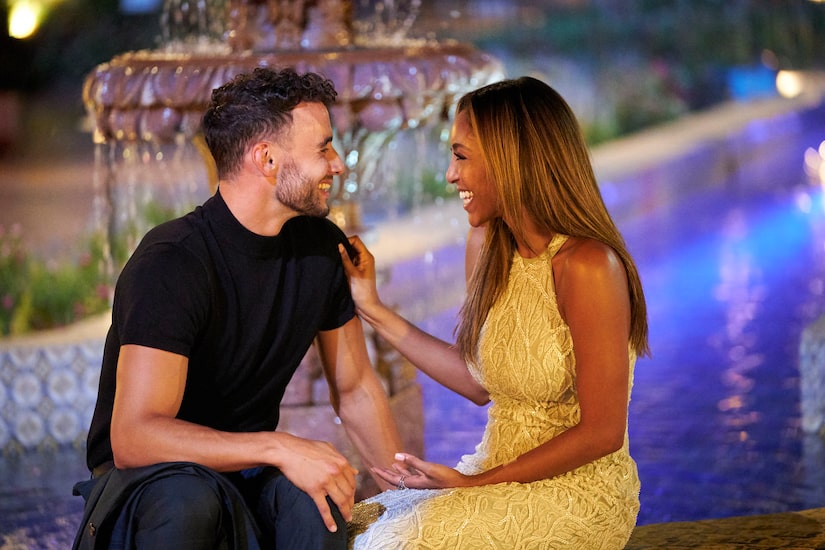 After more consideration, Tayshia believed her dad would approve of Ben because her dad "likes people with very constructive backgrounds, like military backgrounds are a good thing."

Tayshia, in actuality, gave her First Impression Rose to Spencer, and admitted on an episode of "Bachelor Happy Hour" that she felt "so much pressure" about it.

To hear the rest of Olivia's interview with Tayshia, Joe, and Natasha, be sure to listen to the full "Click Bait with Bachelor Nation" now!

Don’t forget to subscribe on Apple Podcasts, Spotify, SiriusXM, the Wondery App, or wherever you get your podcasts.