The “Listen to Your Heart” winners are here to make Bachelor Nation’s holidays a whole lot happier!

This week, Chris Watson and Bri Stauss released the anticipated music video for their single, “Santa Claus Stole My Girlfriend,” the lead track from a forthcoming Christmas EP. In the clip, Chris and Bri sing about how St. Nick infiltrated their relationship.

“Um, listen, I need to tell you something,” Bri nervously tells Chris in a voicemail at the start of the video. “What we had was great and all, and I hope you don’t take this personally, but I’ve met someone. And his name is…”

That’s when Chris belts out the tune’s opening verse, “Santa Claus stole my girlfriend / Had his elves make her a diamond ring / If I had known Kris Kringle was flying around, still single / I would have never let him in.”

Bri then explains how Santa proved he’s “The One,” using her signature soaring vocals. “Gave me every present under the Christmas tree,” she croons, later boasting, “I even met old Rudolph, jumping from the rooftops.”

Elsewhere, Chris laments his romance troubles to a group of guy friends as Bri gleefully dances with Santa on his sleigh. “What’s that belly and red suit got on me?” Chris sings in frustration.

Later, Chris slips into Santa garb (big white beard, belly and all!) to see if he can win Bri back. To his surprise, it works — and by the end of the visual, she takes a seat on Chris’ lap while their buddies dance behind them.

Thankfully, in real life, Chris and Bri are doing better than ever. (Sorry, Santa!) After winning “The Bachelor Presents: Listen to Your Heart” this spring, the couple have grown both musically and romantically.

Earlier this year, they dropped a self-titled album with 10 songs, including their debut hit “Found You.” Back in November, Chris and Bri opened up on Instagram about how lucky they feel to have found each other — especially during such a trying year as 2020.

“The pandemic has been tough for all of us,” shared the pair, who recently performed for Clare Crawley and Dale Moss on this season of “The Bachelorette.”

They added, “But it is so much better having each other and having each and every one of you!”

Watch Chris and Bri’s music video for “Santa Claus Stole My Girlfriend” below. 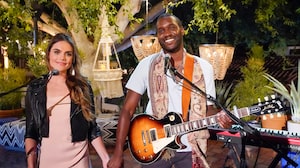 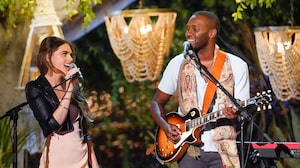