Rudi was invited to sing “The Star-Spangled Banner” at Tuesday’s NBA playoffs game between the Los Angeles Clippers and the Dallas Mavericks at L.A.’s Staples Center — and, yes, the “Listen to Your Heart” contestant’s powerful rendition of the national anthem gave us major chills.

“Can I hire you every night to sing me to sleep? Voice is velvet,” wrote Season 14 Bachelorette Becca Kufrin, to which Rudi replied, “Um yes I think I could do that.”

Earlier this week, Rudi spoke exclusively with BachelorNation.com about her evolution as an artist over the past year. While she’s leaned into pop and R&B sounds on standout singles like “Smile” and “Stupid Boy,” the Texas native explained that her music has always centered her impressive vocal abilities.

“As a person, I am who I am. With my music, it’s the same thing. I write how I feel and that’s what makes me feel good, not having any boundaries and sticking to one sound,” she said. “But my voice is consistent. I’m an R&B soulful singer at heart. Other than that, I’m all over the place — as a human and as an artist. And I think that’s a cool thing.” 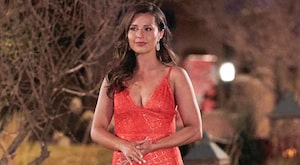