Before he ties the knot with fiancée Jessica Clarke this November, Ben Higgins opened up to BachelorNation.com about his decision to have his father, David Higgins, serve as his best man on the couple’s wedding day.

“He is my best man in every part of my life, so it just made sense,” the Season 20 Bachelor explained. “It’s super cool that he gets to stand up next to me. Obviously, it’s special and I am so glad to have him by my side that day. But it wasn’t like I was thinking, ‘This is more special. I should make it my dad.’ There was just no other choice.”

Ben — who proposed to Jessica in March 2020 after two years of dating — added, “I’m pumped about my dad leading my pack of groomsmen.”

The “Alone in Plain Sight” author went on to say that his dad helped make his May bachelor party extra special even if he couldn’t attend due to health issues.

“He couldn’t be at my bachelor party, which was fine. He had more important things to do, like survive. But he sent me a really cool toast that he prerecorded for the night that we had dinner and they played it for me, so that was awesome and really touching,” Ben said of the fete attended by such franchise stars as Dean Unglert, Nick Viall, Wells Adams, and Jared Haibon.

“My dad said was that he is very thankful that everybody was celebrating me. His focus was how much it means to him that I have friends like I do — because I have some incredible friends from all different seasons of life,” the Indiana native continued. “There were friends from elementary school to middle school to high school, friends I met in college, friends I met at my first job, and friends I met on the show.”

He elaborated, “So, he talked a lot about that and all of them coming together for the first time for one common purpose. It was super special. He just said a bunch of nice things about me, and I think he ended it with saying that I’m not only his son but I’m his best friend. He wished he could be there. He was super sad that he wasn’t there. I can’t wait to celebrate with him at the wedding.” 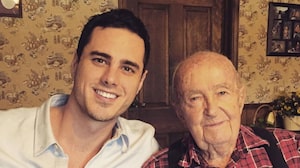