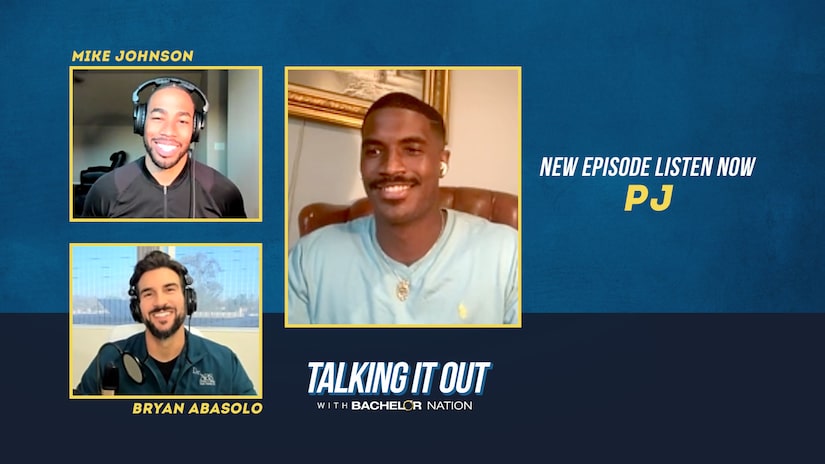 But despite only being on a few episodes of “The Bachelorette,” the Houston, Texas-based firefighter won over the hearts of many Bachelor Nation fans.

PJ stopped by the “Talking It Out with Bachelor Nation” podcast and shared more about his life that we didn’t get to hear about onscreen.

PJ opened up to co-hosts Bryan Abasolo and Mike Johnson about tragically losing his older brother to a shooting in 2007 and his younger brother to violence in 2017.

The Bachelor Nation star candidly shared his little brother’s story, explaining, “Bakari was the shining light of the family... He graduated from Arizona business school in 2017 and he was working on a clothing line.”

PJ’s brother went to Greece with a group of friends for a business trip for his clothing line, Bakari Luxury Sportswear, and things took a violent turn one night when they went out to a bar.

PJ revealed, “Bakari took a selfie with a bottle girl inside and there was a guy who didn’t like that. They had an altercation outside and when Bakari went back inside, the guy came back with other guys. They chased him down and jumped him. He ended up losing his life out there, just like that. I don’t know if it was an American thing or a race thing, but it was really unfortunate the way it went down.”

When Mike asked about the potential racial issue, PJ noted that Bakari was the only Black man in the group he was with and it's definitely possible he was singled out for that reason.

Bryan and Mike also asked PJ if any justice had been served for his family after they tragically lost Bakari.

“They got the guys. It was 10 of them. They had them detained for a while and eight of them are still detained. There was a trial in the fall of 2017. We went to Greece for the trial. The verdict we got wasn’t really representative of the crime at all,” PJ said.

“The prosecutor said he’s been doing this for many years and he’d never seen such a misrepresentation of justice. He pressed for a retrial in a higher court. We got that, so that’s a good thing, but COVID pushed everything back, so right now it’s looking like the retrial will be in February,” PJ continued.

He also discussed how Greece’s justice system differs from that in the United States and members of the group are facing several types of charges.

“They don’t do life sentences there,” the Bachelor Nation star said. “I think the max is 20 or 30 years, but there were a couple of guys they were able to remove from the process because of the way their judicial system works. Here, it would be if you were involved at all you were a part of the murder, but over there some people are able to get much lesser charges.”

Thankfully, PJ said the murder happened in a highly populated area with witnesses and security camera footage, so he hopes that will help them in court during their retrial next year.

And now, as PJ and his family heal, they have found special ways to honor Bakari.

PJ said, “He was my little brother, but I looked up to him. The things he had done and accomplished — I’ve never met anyone who had a bad thing to say about him. He loved life and loved to travel. He was in a business program in China and had been to Europe. He’s the reason I travel now. He set that platform for me to say, ‘I need to get out and see the world.’”

He noted, “Now we have these wristbands that say ‘Travel in loving memory.’ We travel and post ‘BLB,’ which stands for ‘Be like Bakari,’ which was his name. We post pictures with the bands, and it’s kind of like traveling with him because that’s what he loved to do.”

Along with their special wristbands, PJ and his family started the Bakari Foundation to help families who have also lost a loved one to violence.

PJ said that in addition to providing counseling, “We use the money we raise from fundraisers to send those families on a trip wherever they like to go.”

Right now, they also have plans for a healing travel retreat in Costa Rica with his family and other families who have suffered similar losses.

And when it comes to how his family has processed this terrible tragedy, PJ said through all the trauma, they are so grateful for each other and their support system.

The firefighter said, “In my household, it makes you hold onto what you do have a little bit tighter. The crazy thing is, my parents never wavered. It would be easy for them to ask why us and feel sorry for themselves, but they just turned up the love. And we’ve had a support system like no other. To say we did it on our own would be a disservice to everyone who’s helped us out. We’ve had family, the neighborhood, the foundation, and everyone has been supportive. It’s been helpful.”

And to hear more of PJ's conversation on “Talking It Out with Bachelor Nation," check out the full episode below.