The New York Marathon is just days away, and Bachelor Nation star Tayshia Adams is preparing for her first marathon ever.

The former Bachelorette and current “Bachelorette” host took to Instagram to share how she’s feeling leading up to the big day.

Tayshia wrote, “I will admit, training for this has been tough and far from what I imagined, but that’s life, right? All excuses aside I’m still proud of myself for showing up when I could.”

She continued, “Whether it would be running bright n early or late at night, right after getting off an 8 hr flight, in the rain, on a hotel treadmill while traveling for work, or after filming all night long! No matter the condition or situation, I was committed to getting it done however or wherever I could, and because of that I can go into Sunday’s race with pride.”

Tayshia also shared that while she’s been working hard training, her focus isn’t necessarily on how fast she runs the marathon but how much money she’s been able to raise for a great cause.

The Bachelor Nation star wrote, “My marathon time isn’t going to be groundbreaking and I’m pretty sure I’ll be cursing my way through some of it haha, but at the end of the day this isn’t about me. I’m doing this for something bigger, and I can’t thank you enough for all the support you guys have given me!”

She shared just how much money was raised, writing, “I’m so incredibly proud to say that over $280,000 and over 500 kids in Kinango, Kenya will be impacted because over 125 of you signed up to be Chosen to sponsor a child!!!Their lives will be changed for the better…WE DID THAT!!!”

Tayshia concluded her post by saying, “Every step, every mile on Sunday, will be a representation of a higher purpose! For every child, life in all its fullness. Thank you for changing the world with me!”

We can’t wait to cheer Tayshia on as she runs her first marathon!

Her fiancé Zac Clark will be running the New York Marathon alongside her. This will be his eighth marathon and he’s running to support his foundation, the Release Recovery Foundation, which supports individuals affected by addiction and mental illness.

More Bachelor Nation stars like Tyler Cameron and Matt James will also be competing in marathon, and we will be cheering them all on as they complete all 26.2 miles! 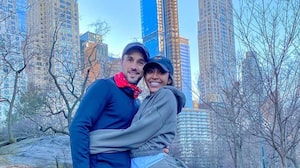 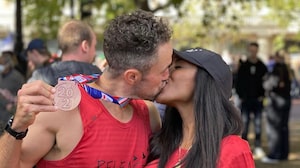