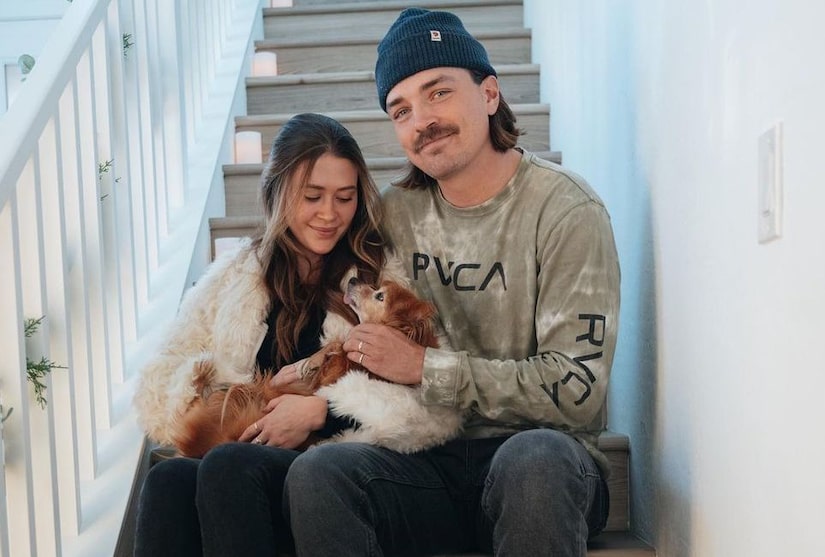 Since then, their relationship has stood the test of time and the couple have been traveling the world together. Earlier this year, they even bought a house together in Las Vegas and have discussed potential wedding plans.

As their lives grew together, Dean and Caelynn welcomed a third travel buddy into their little family, their dog Pappy.

They originally took Pappy in as a foster in January 2020 and by February, they adopted him.

When the Bachelor Nation couple adopted Pappy, they knew what they were getting themselves into with a senior dog. Dean took to Instagram and wrote, “Somehow this little one convinced us to adopt him. It’s not what we wanted to do when we originally fostered him, but dammit he left us no choice. This old geezer comes with a laundry list of health complications, so we decided to fill his waning years on earth with as much love as we possibly can.”

And that’s exactly what they did. Pappy lived his best life and saw the world with Dean and Caelynn from their van.

Now, they took to Instagram to share the heartbreaking news that Pappy crossed over the rainbow bridge to doggy heaven.

In a joint Instagram post, the couple shared videos of Pappy frolicking and cuddling and wrote, “Today was one of the hardest days of our lives. Today our sweet little man left our earth. He took his final breaths in the arms of his loving mother. We weren’t there for the beginning, or the middle of his life, but we were there for what we believe to be the most important part; the end.”

They continued, “The joy he brought into our lives will remain with us until we cross over ourselves only to be reunited with him. And we like to think the joy we brought into his was the cherry on top of a life filled with love.”

The Bachelor Nation couple ended their post by sharing some song lyrics, writing, “‘Some things are born into this world perfect and simply remain that way.’ That’s Pappy. That’s all dogs.”

Many of their fellow Bachelor Nation stars flooded their comments, sending love and support during this difficult time.

Becca Tilley wrote, “I’m so sorry! Y’all gave him the best life! He got to see so many places and have so many experiences because of y’all!!”

Kaitlyn Bristowe chimed in, saying, “I’m so sorry, what a life you both gave him.”

Ashley Iaconetti Haibon added, “Thinking about you guys. You were the best parents a dog could have! You gave him such an amazing life the last two years. So much love! His little spirit will be so missed on earth.”

And Kendall Long said, “I’m so sorry my loves. Pappy was a legend and so lucky to end his days with you lovely peeps.”

We are also sending Dean and Caelynn our condolences and love as they honor Pappy’s life. They really gave him the best last chapter of adventures.