This week on the “Talking It Out with Bachelor Nation” podcast, Mike Johnson and Bryan Abasolo are answering fan questions.

One person wrote in asking them to share their worst first date stories and the co-hosts didn’t hold back.

Bryan started off and shared his experience getting catfished.

The Bachelor Nation star said, “I’ve never had a total nightmare date. I’ve had a lot of okay dates. I’ve also had great dates. But the one time that I can think of is when I got catfished on Tinder.”

He went on to explain that the girl he met up with was not who was in the pictures on her profile, but he decided to be a good sport.

Bryan said, “I went with it. I was cordial and a gentleman. I didn’t walk out. We had dinner and a nice conversation, but that was the one and only date that we had because I was fooled.”

Mike chimed in saying that he has also been catfished before, but that wasn’t even the most bizarre dating experience for him.

He said, “I’ve had my share of bad dates. I’m sure I’ve also been someone’s bad date before as well, so I’m not saying I’m the best dater. One time a lady brought her best friend with her, and I bought food and drinks for all three of us. I had zero idea that her friend was coming until we got there. I got there first, and she pulled up with another lady with her.”

Mike went on with his bad date story, saying, “I thought maybe they just ran into each other and walked in together, but she sat down with us too. I didn’t know what to do, so I rolled with it. That was a first. We ended up having a great time. I’m not going to let you poop on my evening. I had a great time.”

To hear more of Mike and Bryan’s answers to fan questions, check out the full episode of “Talking It Out with Bachelor Nation” below. 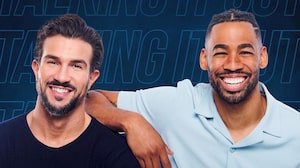 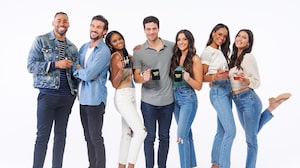