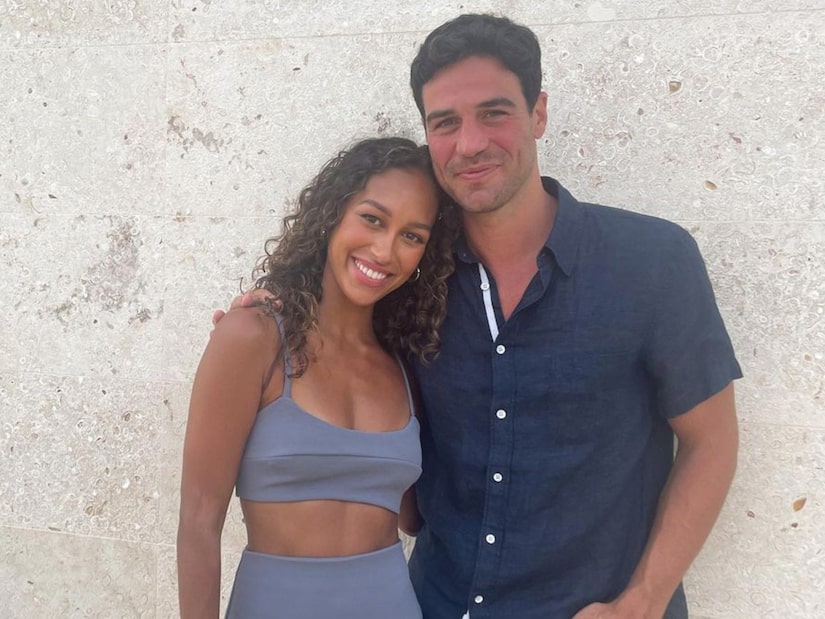 Congrats to the newlyweds!

Then, last week, the two shocked fans with their surprise courthouse wedding video they posted on social media.

Now, the newly married couple is sharing all the details from their special day on this week’s “Click Bait with Bachelor Nation” podcast.

Joe kicked off the story by revealing, “We got married last Thursday. And that’s been a thing people have been asking us, like, did we know we were going to get married? We started the wedding planning process and realized it’s going to take a while. So we said, ‘Why don’t we knock out the marriage thing?’ We thought it would be fun. We had some friends that did it. We thought we would be able to do it over Zoom, but that changed since COVID. You can’t do that anymore. We have been talking about doing it for a few months.”

Joe’s co-host Tia Booth asked how long the two had been talking about a courthouse wedding, and Serena said they have been discussing it since their engagement party in August.

And while they are still planning their big wedding celebration for next September, Joe said, “I wasn’t expecting it, but it has taken a lot of pressure off of the wedding itself. I already feel like the pressure is off.”

Serena chimed in, adding, “Joe has actually been very involved with wedding planning, I will say. But it hasn’t changed much of the wedding planning process in any way other than that we’re already legally married. Now it will just be a celebration!”

She went on, noting, “A lot of people thought that we just woke up that morning and decided to go get married. But there are multiple steps you have to do in advance. It was like a three-week process from when we first Googled it to actually getting married. You can’t really just go day of.”

Serena also shared why she got so emotional and started crying during the ceremony.

She said, “I did get emotional! We didn’t know what to expect at all, obviously. So we go in and I don’t know what I expected, but I just thought you’d be sitting down and signing papers. But we went into this room and it was the two of us, our witness Natasha Parker, and the officiant. And she told us to face each other and look into each other’s eyes and hold hands. I go so emotional. It made it really real!”

OMG, we love that Natasha was their witness! Talk about an amazing “Click Bait” family outing!

And while they were happy to share the exciting news with fans, they actually originally planned to keep their marriage private.

“We really weren’t going to tell anyone. Originally the only people who knew were Serena’s parents, her sister, and Natasha, who was our witness. You can only have one person in the room because of COVID. I also told my parents and brother the night before,” Joe said.

Joe went on, explaining, “When we got home, Serena got an email from her manager that basically asked if we were married because this publication either got tipped off or they had somebody near there that saw you guys walking out of the marriage ceremony. So we don’t know if it would’ve gotten out because technically it is public knowledge. You can look up marriage records.”

And in hindsight, Serena said she isn’t shocked they were spotted.

She said, “We were so dressed down. We were wearing masks and thought there was no way anyone would see us. But there is this big room with so many people before you go into the individual rooms. So we knew there was a chance because there were a shocking amount of couples there at 9 a.m. on a Thursday.”

So once they heard word might get out, Joe and Serena decided to share the video themselves.

Serena said, “Once I got that text, my manager said it was totally our call on what we wanted to do. So we were just like, ‘You know what? Screw it.’ And we shared it with everyone, so we shared the video. If it’s going to get out, we at least wanted it to be released in our way.”

We couldn’t be happier for Serena and Joe and we are wishing them the best as they continue to plan their big wedding celebration.

For now, congrats to the newlyweds!

Check out more of Joe and Serena’s conversation on this week’s episode of “Click Bait with Bachelor Nation” here. 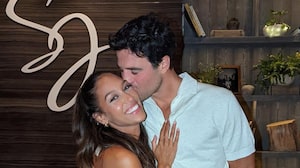