Rachel Lindsay is spilling the tequila on which person got the drunkest at her and Bryan Abasolo’s wedding.

The “Bachelor Happy Hour” host went on Andy Cohen’s Bravo show “Watch What Happens Live” and divulged all sorts of details. One segment of the show allowed for fans to call in and ask Rachel and fellow guest Taye Diggs some questions. Andy called upon Wayne from Dallas to ask a question, and he inquired, “Who got the drunkest at your wedding, and who was the best dancer?”

After hearing the question, Rachel waited a moment said with a huge smile, “Wayne, that would be you.” She explained to Andy a moment later, “That’s my best friend Wayne.”

As much of a surprise as that was, the “WWHL” host really wanted the dirt on which Bachelor Nation member imbibed the most. Rachel revealed, “That would be the dolphin-shark, Alexis.”

Fans of “The Bachelor” may remember Alexis Waters’ unforgettable entrance on the first night of Nick Viall’s season. She arrived in a dolphin suit, although some people couldn’t tell if she was a shark or a dolphin. The debate over which marine animal she was sparked debate, but Alexis explained she was an “aspiring dolphin trainer.” There we have it. 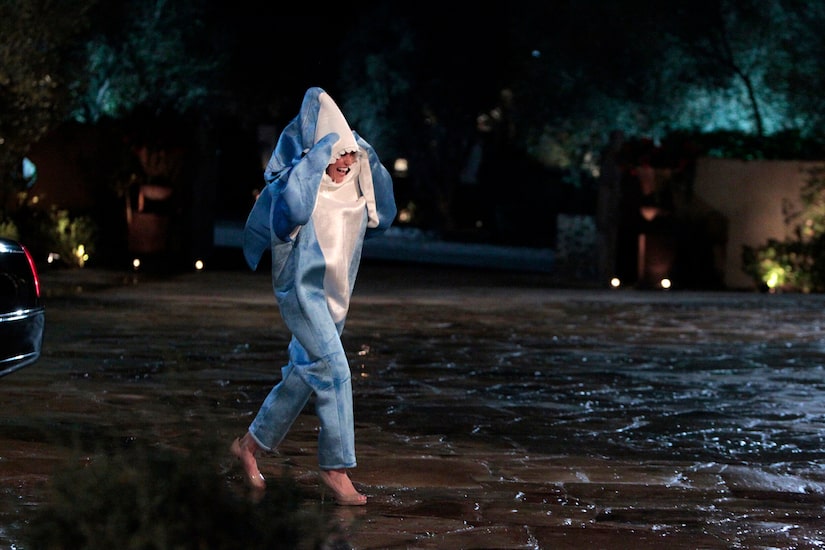 Alexis dolphinitely took advantage of the open bar at Rachel and Bryan’s nuptials. She made fun of her drinking abilities in an Instagram photo from the wedding. She posted a photo with the sunset in the background and wrote in her caption, “I’m finally alive and well and we got back Sunday so that’s when you know .... or maybe it’s because I drink like I’m an 800 pound man.”

“The Bachelorette” Season 13 couple tied the knot August 24 at the Royalton Suites Cancún. Rachel has slowly but surely been sharing videos and photos from her wedding day, including images of the table settings and invitations.

Rachel told her “Bachelor Happy Hour” co-host Ali Fedotowsky-Manno that the big day was “a fantastic time” and “everything I ever wanted.”

After exchanging I do’s in Mexico, she and Bryan hopped overseas for a romantic and beautiful honeymoon in Santorini and Mykonos, Greece.