There were no boos, only cheers, when Hannah Brown took the stage on Monday’s episode of “Dancing with the Stars.” She and her dance partner Alan Bersten performed a jazz routine to Donna Summer’s disco classic “Bad Girls.”

Each dancer donned a spooky outfit for the show’s special Halloween-themed episode. The Season 15 Bachelorette’s outfit paid homage to her days as a pageant queen, and she wore a "Miss Living Dead" sash.

Hannah and Alan received mixed reviews from the judges. Carrie Ann Inaba, for instance, told Hannah there was “something lacking in your performance” and said she looked “disconnected.” Fellow judge Bruno Tonioli told Hannah she could “do better,” but Len Goodman praised the pair for their hard work. He said the pair did “a terrific job.” They ended the night with a score of 25/30.

Hannah has had a steady stream of supporters during her time on “DWTS,” but this week’s turnout felt larger than usual. Demi Burnett, Heather Martin, Sydney Lotuaco, Rachel Lindsay, Kristina Schulman, Eric Bigger and Whitney Fransway were among the fellow Bachelor Nation members who cheered on Hannah and Alan from the sidelines. Fellow “Bachelor in Paradise” and “DWTS” alum Joe Amabile and his girlfriend Kendall Long also attended the show. 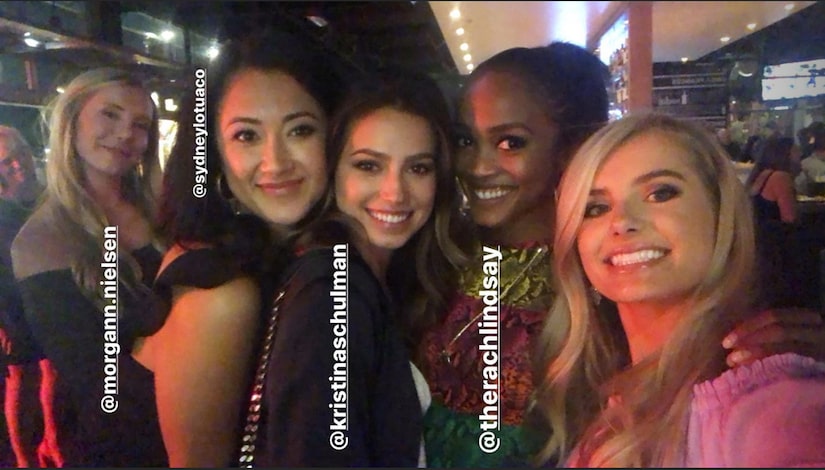 As much as the 25-year-old appreciates the love from all of her friends, she’s been open about feeling homesick and missing her family back in Alabama. She said in a pre-package video last week, “I just miss being on my couch with my mom and my dad watching a movie after dinner and playing with my dogs.I miss the simplicity of home.”

She told “Entertainment Tonight” that evening, “I could put myself in … our really great gray L-shaped sectional in the corner seat with my dog in my lap. I can’t wait to do that one day soon… There’s nothing like being home.”

Hannah’s parents Robert and Susanne Brown flew to Los Angeles and cheered her on from the sidelines a few weeks ago. Susanne even threw some shade at the judge’s scores during Disney Week when Hannah and Alan danced the foxtrot to ZAYN and Zhavia Ward’s cover of “A Whole New World.” Hannah said in an Instagram video that night she was “pretty sure” her parents “cried the whole time” while watching her dance. Hannah and Alan received two nines and one seven, and Susanne said, “It should’ve been all nines.”

Hannah and Alan received enough votes to continue on to next week, so we can’t wait to see what they bring on next!