Joe Amabile and Serena Pitt’s love story captured the hearts of Bachelor Nation fans throughout their entire journey on “Bachelor in Paradise.”

And now, the newly engaged couple is sitting down exclusively with BachelorNation.com to reveal what’s next for them, what they realized watching the show back, and what they learned about each other’s oddest habits.

Since they left “Paradise,” the couple revealed that they’ve been spending a lot of time together, have met each other’s families, and have plans to move in together in early 2022.

As for tying the knot, Serena said, “There’s definitely going to be a wedding,” but for now they’re just excited to move in together and celebrate their engagement publicly.

And as Serena and Joe have been watching Season 7 of “Bachelor in Paradise” back with all of us, the newly engaged couple shared what they learned about each other in the process of reliving their love story.

Joe joked that Serena was “a little more emotional than I thought,” and Serena agreed, saying, “I did a lot of crying in interviews just saying I was so happy!”

Joe noted that when they first got home from “Paradise,” “Serena was like ‘I barely cried,’ but you were crying a lot at the end.”

Serena said she got particularly emotional towards the end of their time in “Paradise” because she was just overwhelmed by happiness.

“I would say I cry more when I’m in a happy place. Definitely if I’m upset or frustrated, tears will come out. But I am really more of a happy crier and I was very emotional in those last couple of days. We were just very in love and happy and it was very exciting,” the Toronto native explained.

She said she got also emotional watching the finale last night, and Joe added that he “absolutely loved watching it all back.”

Now that the couple has been spending a lot of time together since getting engaged, they said they’ve discovered each other’s strangest habits.

Serena kicked things off by revealing Joe’s bizarre habit of overcooking chicken. The Bachelor Nation star revealed that her fiancé is “petrified of salmonella poisoning, so he always overcooks the chicken because he’s terrified that it’s going to be undercooked and that we’re going to get salmonella.”

Serena also poked fun at Joe’s wardrobe, saying, “What you saw on the beach is his entire closet. Gym shorts and so many T-shirts, but we’re trying to refrain from the socks and sandals. We’re working on that.”

Naturally, Joe had to weigh in about Serena and shared that her strangest habit is her carefree attitude about her bad driving.

“Serena is an awful driver,” Joe said. “I mean to the point where it’s actually scary. I’ll be like, ‘Do you realize what’s happening on the road?’ And she’ll be like, ‘Nah, not really.’ So I guess how casual she is about being a bad driver.”

Serena laughed and chimed in, saying, “I’m not gonna fight you on that, it’s true! But I’ve never been in an accident and I’ve never gotten a ticket!”

Joe shared another one of Serena’s habits, and it’s honestly really relatable.

The Bachelor Nation star said that when he and his fiancée order dinner, “Serena always wants to make a snack as soon as we order.”

Serena explained herself, saying, “I do! I get excited for the food and I get hungry, so I need a pre-dinner meal.”

We feel you, Serena, and Joe said that he’s okay with lots of appetizers in their relationship!

We can’t wait to see what’s next for these two.

Joe and Serena talked more about their plans to move in together, potentially in New York City, on this week’s episode of “Bachelor Happy Hour.” Check out their entire conversation below! 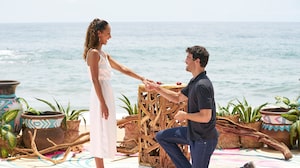 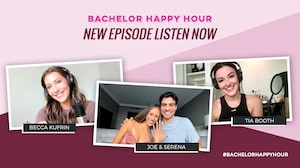